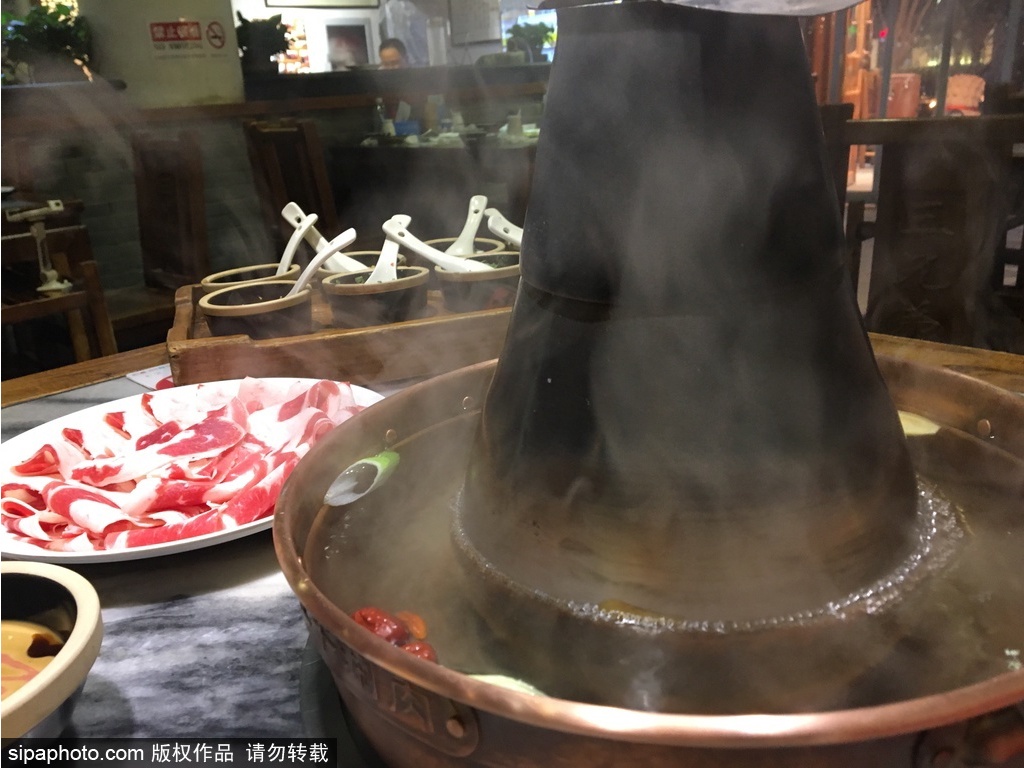 Instant-boiled mutton, also known as Mongolian Fire Pot or dip-boil mutton, is a Chinese hot pot dish. Traditionally, Chinese people have eaten it inside the home during cold winter weather, but in recent times, instant-boiled mutton has been eaten year-round. It is also eaten in restaurants.

Mutton slice often uses different cut from the back (eg. shangnao, sancha, etc.) and rear legs (eg. modang). The tail of the lamb is used to prepare the soup base.

The dish originally consisted of small, thick slices of mutton. By the Qing Dynasty (1644-1911), dip-boiled mutton had become popular both in the imperial court and among the common people. The year 1854 saw establishment of the Zhengyanglou, the first Han-owned restaurant in central Beijing to specialize in instant-boiled mutton. The dish was served in paper-thin slices – an innovation that heightened its popularity. At the beginning of the Republic of China (1912-1949) period the Beijing Donglaishun Restaurant enticed the chef in charge of slicing mutton away from the Zhengyanglou by tripling his pay. It thereafter specialized in instant-boiled mutton. Donglaishun proprietors went to great pains to ensure excellence by selecting only the best mutton, slicing it as finely as possible and compiling seasonings that most enhanced its flavor. The Donglaishun thus gained an unassailable reputation.

Instant-boiled mutton dates back to the Yuan Dynasty. At one point during a battle, the Khagan of the Mongol Empire, Kublai Khan, had a sudden craving for stewed mutton. However, the enemy's troops were approaching. To satisfy Kublai Khan's desire, a chef quickly cut off a dozen thin mutton slices and put them in boiling water. He removed them as soon as the lamb changed color and put them into a bowl with salt. Kublai Khan finished the mutton quickly and returned to the battle, which he won. At the victory banquet, Kublai Khan requested that the chef make this lamb dish again and named it instant-boiled mutton.

When instant-boiled mutton is eaten in China, a hot-pot of boiling water is placed in the middle of the table. Tofu, Chinese cabbage, bean sprouts, and vermicelli are normally included in the hot-pot. Lamb is pre-sliced paper-thin into unbroken pieces and served on the table. Eaters pick up some pre-sliced raw lamb using chopsticks, put it in the boiling hot-pot, and remove it as soon as the lamb changes color. Each person has a small bowl to hold sauce for the cooked lamb; the sauce is normally a mixture of sesame sauce, chili oil, leeks, and more. Dong Lai Shun Restaurant is always the first to come to mind when it comes to the instant-boiled mutton in Beijing. Boiled in distinctive copper pots over white-hot charcoal, the mutton features fresh and tender in texture without any other spices apart from a few green onion and ginger. By virtue of high-quality and thin-sliced strips of meat, excellent flavor and exquisite tableware, Dong Lai Shun was approved as the China’s Century-Old Restaurant. The Yi Tiao Long Restaurant, originally named Nanhengshun Mutton Restaurant, opened in the Qing Dynasty (1785AD). It is a famous Muslim restaurant. The restaurant is featured the distinguished courtyard-style of the Qing Dynasty with authentic instant-boiled mutton hot pot served at the first floor, Muslim dishes served at the second floor and the banquets served at the third floor. Its instant-boiled mutton hot pot is best-known. Not only is it voted as the “Famous Beijing-style Hot Pot”, but also its cooking method is enlisted in the Beijing Municipal Intangible Cultural Heritage in 2007.

There are four characteristics of Yi Tiao Long instant-boiled mutton hot pot: first, the ingredients are in high quality. The mutton is selected from the sheep in Gansu Province, which tastes quite fresh and tender; second, the mutton is well processed. The unique means can keep the mutton fresh and eliminate the gamy odor of mutton. Third, the various dipping sauces are made from ten kinds of seasonings by secret recipe, such as sesame paste and seafood sauce. Fourth, the wheaten food cooked by the method from imperial kitchen is delicious. Especially the sesame crisp cake tastes tender and crispy.

Jubaoyuan is a long-established Muslim restaurant in Niujie. The restaurant is charactered by the traditional Beijing copper pot, the clear soup of hot pot, fresh red meat and the special sesame paste. Here you can feel the real Beijing flavor through the copper hotpot heated by charcoal, the clear soup and the sesame paste. The tender mutton, without its special taste, is perfectly cut. The supreme Chinese pancake is also available, and one person is limited to buy five pancakes.