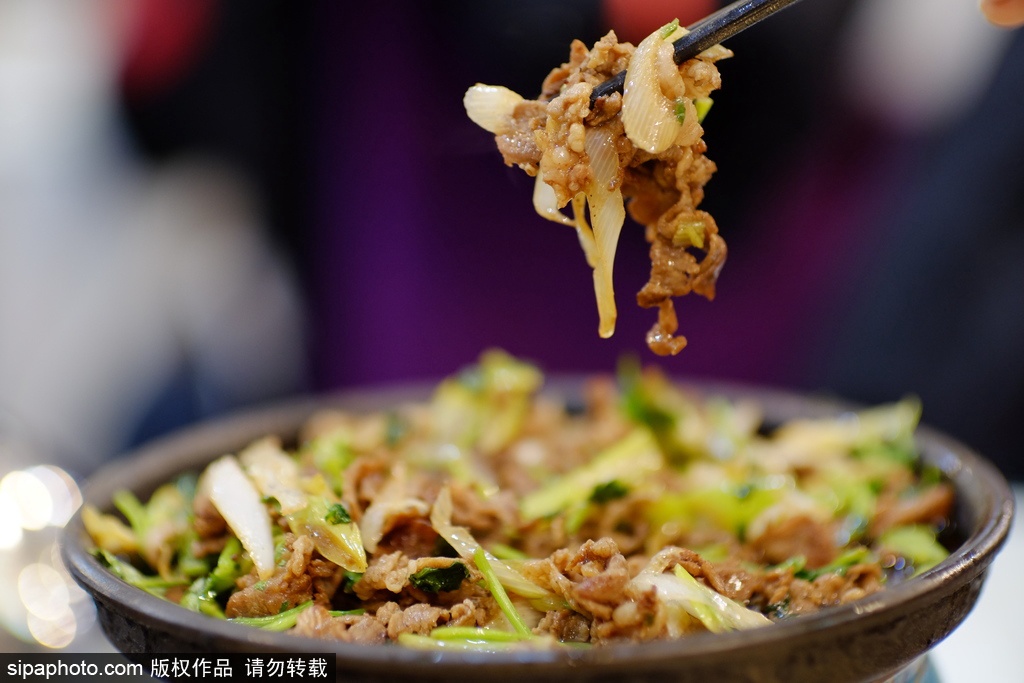 It is one of thebest food in Beijing. The materials for Beijing Barbecue is often mutton andbeef. Before barbecuing, the meat is dipped into condiment sauce made of soysauce, cooking wine, ginger juice, sugar, and sesame oil. The scallion andonion is put on the baking tray first. After they turn tender, the meat withcondiment sauce is put on the scallion and onion. The barbecued beef and muttonis often eaten together with baked wheaten cake and cucumber.

The Beijing barbecue has a longhistory. It has a unique flavor and use particular materials and exquisiteskills. It has very high status in the cooking history of Beijing, and evenChina. It started from the royal court of Ming Dynasty, and at that time, itwas called as “eating grilled mutton”. Then it spread to the folks and becamepopular among common people. Barbecue is a local dish with unique taste inBeijing. When making the barbecue, the sliced beef and mutton are marinated atfirst. After that, they are put on a special round iron plate (which is alsocalled as “Zhizi”) for roasting. Barbecue mainly includes roast mutton of “KaoRou Ji” and roast beef of “Kao Rou Wan”, of which the making processesrepresent the top level of Beijing barbecue. 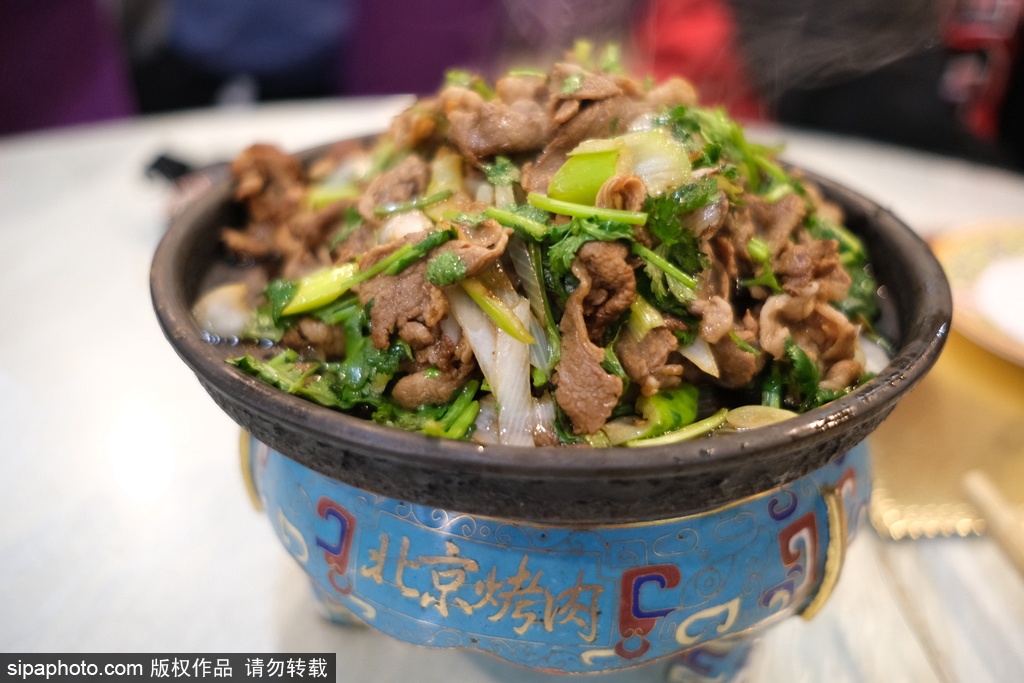 “Kao Rou Ji” was founded in the 28th year of Emperor Daoguang’s reign (1848 AD). In the Qing Dynasty, the lotus market of Shichahai was opened on the first day of the fifth lunar month every year. Ji Decai, the founder of the restaurant, would go to the Yinding Bridge with a cart and set up a barbecue stand to sell roast mutton from mid-July to the ninth day of September. The smell of his barbecue attracted many tourists. His business was really prosperous. After that, the roasting skills of his family, being passed down through many generations, became mature. The family gradually changed from a peddler to a shopkeeper, and the brand “Kao Rou Ji” was established beside the Yinding Bridge. After 1956, “Kao Rou Ji” developed faster and became more popular. Since the establishment, “Kao Rou Ji” has never left the Shichahai. It has become a famous and unique restaurant with characteristics of the region. Eating meat and enjoying the view, the tourists are always cheerful. The making skills and management mode of “Kao Rou Ji”, which show the food culture and folk culture in Beijing, have great research value.

“Huaizhong baoyue” is one of the restaurant’s eight flavors which have been inherited. In the past, the spirit of Kao Rou Ji was self-roasting and Wuchi, a graceless-style barbeque. “Wuchi” refers to the posture and the style of a self-roasting barbeque. It shows the passion of the real men who truly enjoy the taste of a barbecue. Generally speaking, when enjoying a barbecue, real men have to take a bar about two chi (equal to 1/3 meter) long made from Abelia biflora. Standing next to the Zhizi, the iron plate, with one foot on the bench, they put the meat marinated by the staff on Zhizi surrounded by the smoke and turned the meat frequently to make it well roasted. “Self-roasting” means that one needs to take the ingredients and control the fire by himself, giving full expression of openness and directness.

What does the “eight flavors” of the barbecue means”? It means the barbeque can be “tough, tender, burnt, scorched, sweet, salty, spicy and Huaizhong Baoyue”. “Huaizhong baoyue” means adding the egg fluid, which has the shape of the moon after being half-cooked, to the meat. It seems easy, but the use of egg liquid allows the meat to be tenderer and tastier. As for Wuchi, when the meat is medium rare, the barbecue makers will use the chopsticks made from Abelia biflora to build a small nest in the meat, which is low at the middle and high around. Then, they add the egg fluid into the nest to form the shape of the moon. When the meat is close being cooked, they mix the half-cooked egg liquid fully into it. In this way, a unique taste is formed. The entire process is a real test of the barbecue makers’ skills.

“Kao Rou Wan” opened in the 25th year of Emperor Kangxi’s reign (1686 AD). The owner was a Hui person with the surname of Wan, from Dachang Hui Autonomous County in the east of Beijing. His family sold charcoal and roast beef in carts at the very beginning. After the struggle of three generations, they finally purchased property around Xuanwumen and established a store. The brand was “Kao Rou Wan Ji”, which was changed to “Kao Rou Wan” later. For over three hundred years, the roast beef of “Kao Rou Wan” has always been popular. It is deeply rooted in Beijing folks and well connected with the local customs. It has been passed down to nowadays and has become a crucial representative of the culture and skills of Beijing cuisine.

In Kao Rou Wan, the selection of ingredients is very strict. The meat has to be the tenderest part such as rib eye, round steak and sirloin tip from 4- to 5-year-old calf cows or dairy cattle weighing more than 300 pounds. The tendons should also be removed. The meat-cutting skill is elaborate. A pointed steel knife about one chi long is used to cut the meat into uniform slices of about 6mm by pushing and pulling. Zhizi, Kao Rou Wan’s treasure, is also very unusual. It is said that it has been used for over 100 years.