Yandaixiejie Street is located in front of the Drum Tower, Dianmenwai Street，belongs to the boundary of Changqiao in Xicheng District. 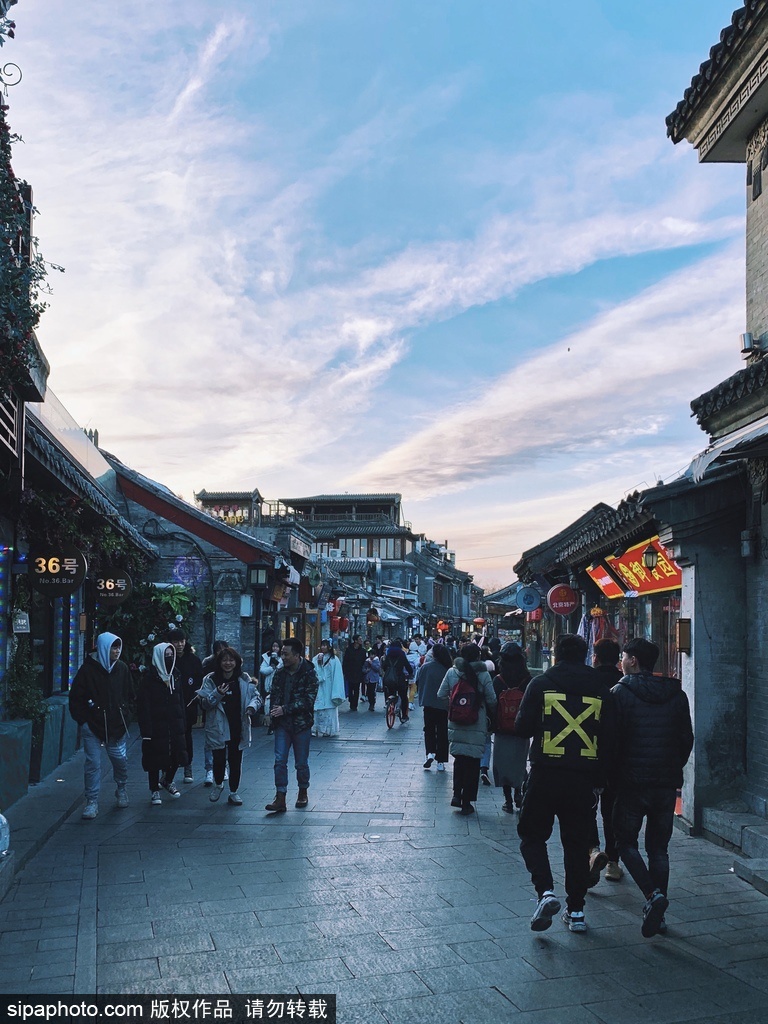 Just a hundred meters south of Beijing's Drum Tower, one of the capital's oldest hutongs (traditional alleyways) is easy to overlook. A narrow alley off a busy road, it's rather innocuous when there are no crowds of people clamoring at its entrance. Yandai Xiejie hutong's name translates to "smoking pipe" street, a remnant of the Qing dynasty days when the street was filled with stores selling tobacco and pipes.

Today Yandai Xiejie is as appropriate a metaphor as any for Beijing today. Redeveloped just prior to the Olympics, the hutong was redeveloped for tourism, but not without an eye on history. The subsequent renovations recovered some historical features while simultaneously opening the doors for retailers to get a leg up.

Yandai Xiejie, one of Beijing's oldest hutongs, is located next to the Houhai Lake. The street is a chance to experience Chinese hutongs as well as a shopping street, and while you are there you should take the opportunity to visit the Houhai Lake.

Yandai (smoking pipe) Xiejie (byway) is one of the oldest hutongs in Beijing. Yandai is the name of a Chinese pipe that was traditionally sold on this street.

Located in Xicheng district, it is close to the Shichahai and Houhai, both are famous attractions in Beijing. Yandai Xiejie is 232 meters long with its east end on the Di'anmen Street and the west to the Yinding Bridge.

A typical representative of the old Beijing, Yandaixiejie is home to various specialty bars and curio shops for souvenirs, antiques, paintings, etc. There are more than 20 cafés and bars with different styles on the street. One can have a cup of coffee when feel tired and enjoy the beautiful scenery of the Houhai Lake.

Besides, there are also many restaurants on the street. Here you can go to traditional Chinese restaurants--roasted lamb of Master Ji, stewed pork liver (a traditional Beijing snack) of Master Yao, the Meiyuan Dairy, baked wheaten cake with donkey meat of Mr. Wang and wonton of Master Hou.

Tasting the delicacies of traditional Beijing style, shopping in the widely varying stores, one would experience the uniqueness of Beijing in Yedaixiejie.

In the past and today

Know as Yandai Xiejie in Chinese, the Yandaixie Street is one of the oldest hutongs in Beijing. Located in the Xicheng District, it is close to the Shichahai which are famous attractions in Beijing. It is 232 meters (253 yards) long with its east end on the Di'anmen Street and the west to the Silver Ingot Bridge. Stepping into the street for about 50 meters, one would come to the south end of the Dashibei Hutong, which goes to the Drum Tower West Avenue (Gulou Xidajie). Passing over the Silver Ingot Bridge one can reach the Houhai Bar Street.

According to a book that was published during the reign of Emperor Qianlong of Qing Dynasty (1644-1911), the Yandai Byway was initially named Drum Tower Xiejie and was changed into the present at the end of Qing Dynasty. It is recorded that there were many smoking pipe stores on the street in the Qing Dynasty, among which there was one named Shuangshengtai. The store owner put a 1.5-meter-high (5-feet-high) wooden smoking pipe in front of the store as a sign. As time went by, the street was known by the whole city for its giant smoking pipe, hence its name. Some people also say that the street looks like a smoking pipe.

After the 1911 Revolution, the Qing Royal Family was overthrown, the banners (Manchurians that were fed by the Qing government) lost their incomes and many of them had to sell their properties, such as antiques, to make a living. Gradually many antique markets were formed in Beijing, among which Yandaixie Street was a large one. But after 1949, the antique trading on this street gradually declined.

The Yandaixie Street lost its commercial position in the 1950s and many buildings were changed to residential buildings, including the Taoism Temple--Guangfu Guan. In 2007, the street was redeveloped to recover its historical features. Guangfu Guan has become a tourist site and many reproductions of classic architecture were built on the street. In the buildings are stores of Indian clothes, Miao costumes and accessories, Tibet costumes, Lijiang crafts, Shaanxi pottery, badges and quotations of Chairman Mao, etc. If you want to experience Chinese commercial culture, the best way would be to buy some souvenirs and bargain with the shopkeepers. 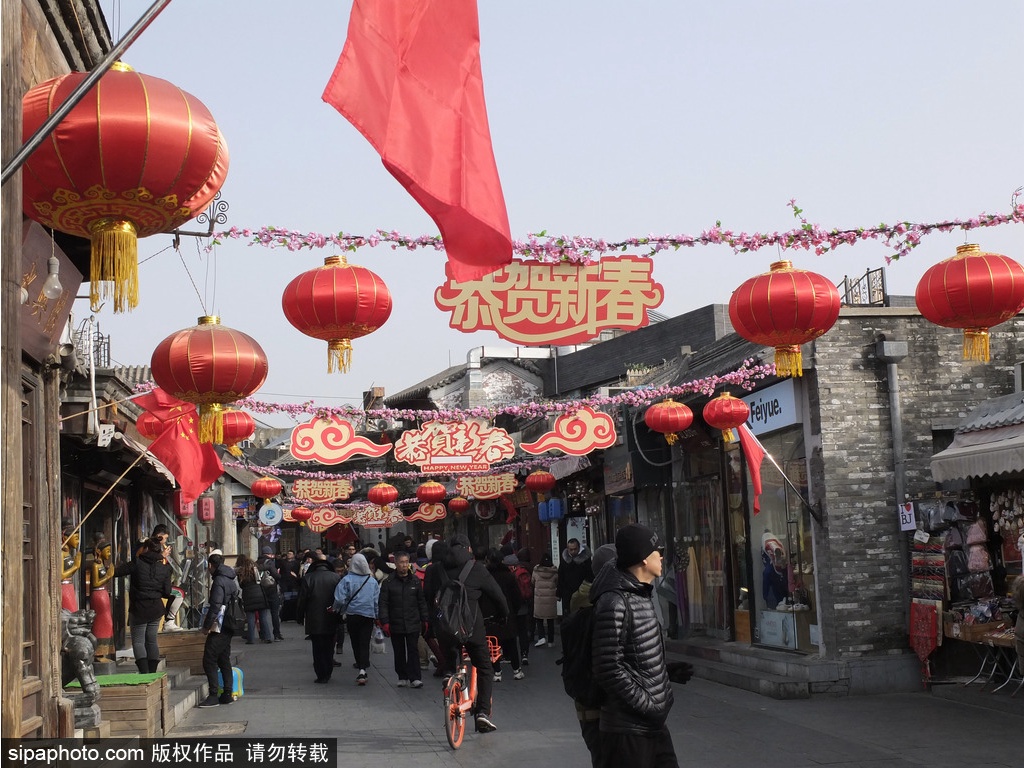 Besides these featured stores, there are also many restaurants along the Yandaixie Street. Here you can go to traditional Chinese restaurants--roasted lamb of Master Ji, stewed pork liver (a traditional Beijing snack) of Master Yao, the Meiyuan Dairy, baked wheaten cake with donkey meat of Mr. Wang and wonton of Master Hou.

Having tried the local snacks, one can go to the restaurants that provide delicacies of other regions. The Xingfumanman (Full of Happiness) Restaurant serves Taiwan snacks, such as Oyster Starch Pancake, roasted sausage, round pastry, etc. The Thai Restaurant and Ou Restaurant purvey Thai food. The Moon in the Lake Café features Korean food and there are also many western restaurants on the street.

There are more than 20 cafés and bars with different styles on the Yandaixie Street, among which there is the Night of Yinding, the largest café in the Shichahai area. And others like the Red Mansion, the Sea Bar, the Show Place Café, the Wenshi Café, etc. One can have a cup of coffee when tired and enjoy the beautiful scenery of Houhai Lake. Tasting the delicacies of traditional Beijing style and those of other places, shopping in the widely varying stores, one would best experience the uniqueness of the city.

How to get to Yandaixie Street

2. Take Subway Line 8 to Shichahai, get out of the station from Exit A2, and then walk west for 1 minute. Turn north and keep walking for 5 minutes, you will get there.