Visit these places for a leisure vacation in Hebei！

Hebei is very close to Beijing. It takes only two or three hours to drive there. On weekends, you can take your family to enjoy the mountains and rivers to see the beautiful scenery of the land of Yan and Zhao. Chengde Mountain Resort, this former royal garden has both the elegance of the south of the Yangtze River and the wild charm of the mountain village. You can climb the Jinshanling Great Wall and watch the sunrise or sunset, the scenery is extremely beautiful! The mountains in Hebei are very energetic. Ascending to the top of the mountain and overlooking the surroundings, you will admire the wonders of nature! There are still many places worth visiting in Hebei, take a stroll in your leisure time! 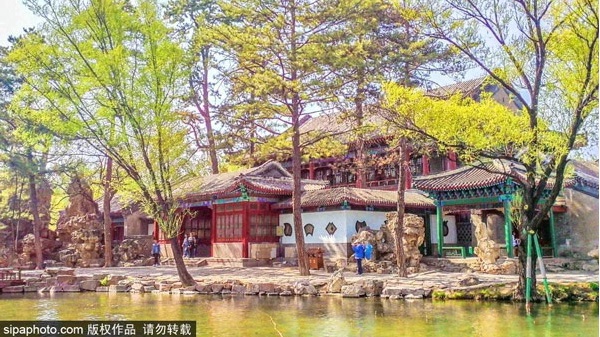 Chengde Mountain Resort used to be a royal garden. It is a combination of elegant garden in the south of the Yangtze River and the wildness of the mountain village north of the Great Wall, and has the essence of natural landscape.

Whether in the gorgeous autumn or the snow-capped winter, the Mountain Resort is always beautiful! 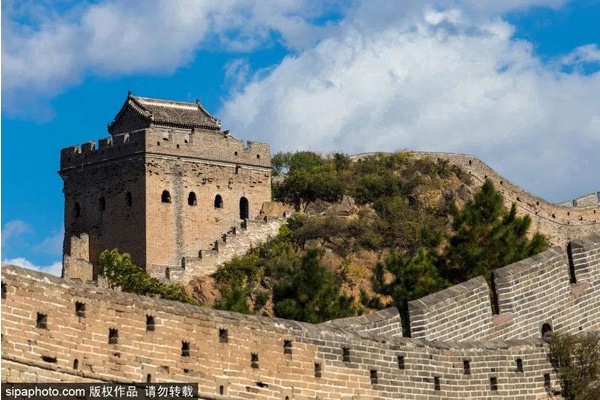 Jinshanling in autumn is even more beautiful like a painting. After climbing to a high place, you can touch the white clouds with your hand. Whether it is the first light of the dawn or the afterglow of the setting sun, it is full of fairy charm. It would be very commemorative to take a photo here.

Bangchui Mountain is located in Qingchuifeng National Forest Park. It is one of the ten wonders of Chengde, and it is also a wonderful mountain bestowed by Emperor Kangxi.

What is quite a wonder here is that there is a mulberry tree about 3 meters in height growing halfway around the peak. It is estimated that this mulberry tree has lived with the peak for 300 years and is said to be the eldest mulberry tree in China. It is adjacent to Xibaipo to the south, Wuyuezhai Forest Park to the east, north waterfalls to the north, and Wutai Mountain, one of the four famous Buddhist mountains in China, to the west.

The natural ecology here is in a primitive state. It is famous for “cool, quiet, wild and secluded”, and is known as an emerald in the Taihang Mountains.

Tuoliang Mountain is named because its peak resembles a hump. The main peak is 2281m above sea level, and is one of the main peaks of Taihang Mountain. There are layers of greenery, with forests and picturesque gorges, clusters of waterfalls, frequent seas of clouds, pleasant weather... Everywhere is extremely fascinating.

The vegetation coverage rate is over 90%. There are tens of thousands of acres of lush virgin forests. From the valley to the peak, there are trees and shrubs such as white birch, pines, cypresses, maples, aspens and shrubs, and wild roses, lilacs, chrysanthemums, nasturtiums, rhododendrons, golden flowers, and Morningstar Lily are everywhere. Exotic flowers and plants, as well as rare wild game such as black fungus, wild yellow flowers, mushrooms, and land bark, and countless kinds of precious Chinese medicinal material. What’s even more fascinating is that there is a hardly-seen sky grassland on the top of the beam. Every summer, the nasturtiums everywhere seem to bring people to artificially planted flower beds.

Walking into Tuoliang is like walking into a natural oxygen workshop. The average temperature here is only 18℃~19℃, and it has the reputation of “cool polar region”. 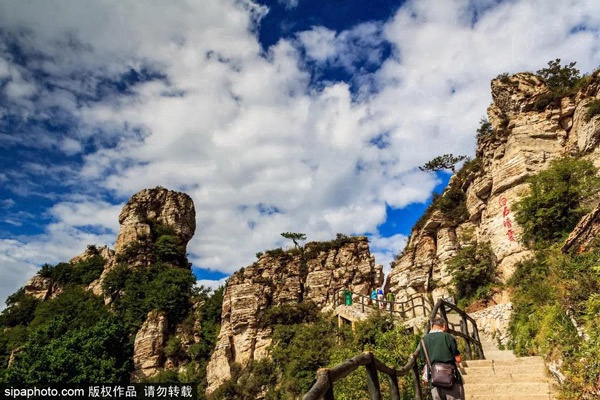 Baishi Mountain is a world geological park and a national 5A-level tourist attraction. Located in Laiyuan County, Baoding City, Hebei Province, it occupies the northernmost part of Taihang Mountain for eight hundred miles, and is known as “the No.1 of Taihang”.

The vegetation coverage rate of Baishi Mountain is as high as 98%, and the content of negative oxygen ions is quite high. It is a real “natural oxygen bar”. Known as the “natural air conditioner”, the average temperature in summer is 21℃. It is one of the famous summer resorts in China!

Baishi Mountain has diverse landscapes, including peaks, forests, strange rocks, cliffs, canyons, forests, sea of clouds, Buddha light, plank roads and other landscapes. It has the characteristics of strange, majestic, dangerous, illusion and show of mountain landscape, and it is also known as “China’s Wonderful Mountain”. Baishi Mountain has a unique topography of marble peaks and forests in the country. There are many strange peaks, strange rocks, and various poses. Making people can’t help but awe at the wonders of nature!

The highest peak, Foguangding, is 2096m above sea level. The mountain is tall and has “three peaks, six terraces, nine valleys, and eighty-one peaks”. As its shape and rhyme resemble Huangshan Mountain, it is also called “Huangshan in North China”. As you may know, the most famous landscape of Baishi Mountain is the sea of clouds. The unique geographical location and meteorological conditions have created a sea of clouds landscape in Baishi Mountain that is amazing to the world. You can witness its most dreamy moment when there are white clouds on the top of the mountain.

Sometimes the clouds are like the sea, with turbulent waves, and sometimes the curtains are light, and people feel like they are in a fairyland. Of course, this beautiful scene can only be seen when standing on the top. The picture seems to put people in a fantasy world, beautiful like a fairyland. 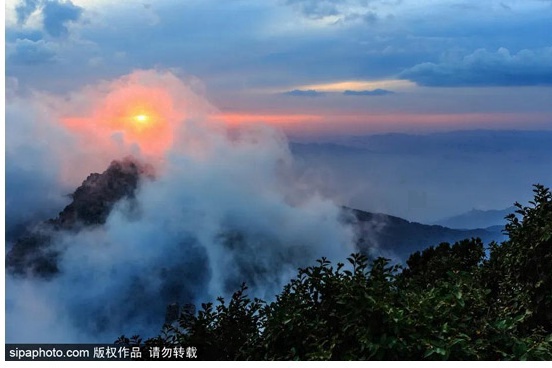 On the cliffs at an altitude of 1,600m to 2,100m, the scenic area has built a 16km-long suspended cliff road. Looking up, the cliffs are like knives and an axe; looking down, the bottom of the valley is like an abyss; walking in the meantime, you will find every step startling! Coming here, you can not only climb the wonderful mountains and appreciate the sea of clouds, but also feel the artistic conception of the “city in the sky”. Kaiyuan Temple was originally called Jingguan Temple and was built in the second year of Xinghe in the Eastern Wei Dynasty. In the late Qing Dynasty, due to disrepair for a long time, only the Bell Tower and Xumi Pagoda remain until today. 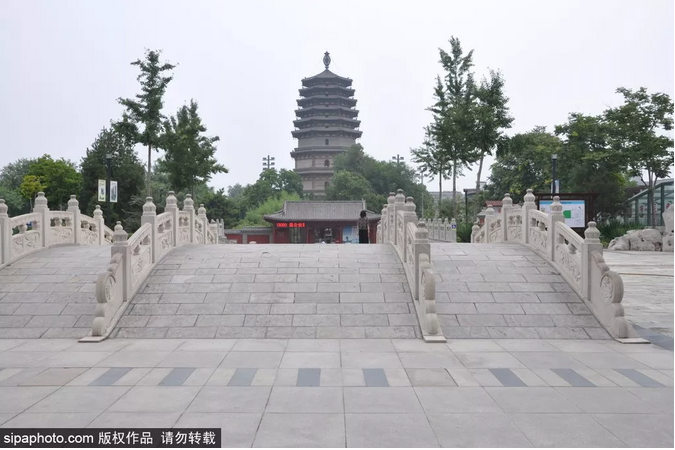 Tianning Temple and Lingxiao Tower were built at the same time during the Weitong Reign of Emperor Yizong of Tang Dynasty. The Lingxiao Tower is tall and straight into the clouds, hence the name Lingxiao (above clouds). It is a great view of the county.

The Lingxiao Pagoda contrasts with the Xumi, Chengling, and Duobao towers. Approaching the tower and standing at the bottom of the tower, you may feel a sense of solemnity rises from the bottom of your heart.

The mountain gate in front of the tower highlights the uniqueness of this tower. The first to fourth floors of the tower were rebuilt on the remnant site of the Tang Pagoda in the Song Dynasty. The entire brick structure; the upper floors are rebuilt in the Jin Dynasty and have a brick-wood structure.

The overlap of history is so striking, yet so harmonious. On the beach of Anaya, there is a library facing the sea, standing alone on the empty beach. You may even believe this is the end of the world.

Known as “the loneliest library in the world”, it is the earliest spiritual building in Anaya, and it has long become the most unique scenery on the coastline.

The library has two floors, the space is not very large, the layout is complicated but not chaotic.

There is a row of chairs in front of the glass windows on the first floor. Those who sit here and read a book, as long as they raise their heads, through the glass, the sea will fall in front of them. This is an extremely wonderful and comfortable experience.

The scenery here is so gorgeous, making people willing to put down their phones and sit quietly reading a book.

Anaya Auditorium is currently the only seaside church in China.

The whole church is white, splitting the sea and the sky. The three constitute the most concise and flawless beautiful picture in the world. The interior of the auditorium is the same as the library, and you can see the sea when you look up.

Every night, the white church stands alone in the dark night sky, like the warmest beam of light in the world.

The auditorium from outside is also a popular spot for taking photos, and you can shoot a blockbuster in just a few minutes! Many people come to Anaya and will be amazed at such a beautiful place not far away from Beijing.

Rather than saying that Anaya is a seaside resort, it is better to say that it is a peach blossom land and utopia by the sea.

The experience that Anaya brings to people, especially Beijingers who have been under urban pressure for a long time, is a release and a return to nature. If you love the sea, the breeze, and the tranquillity and beauty, then don’t hesitate to run towards this piece of freedom land!