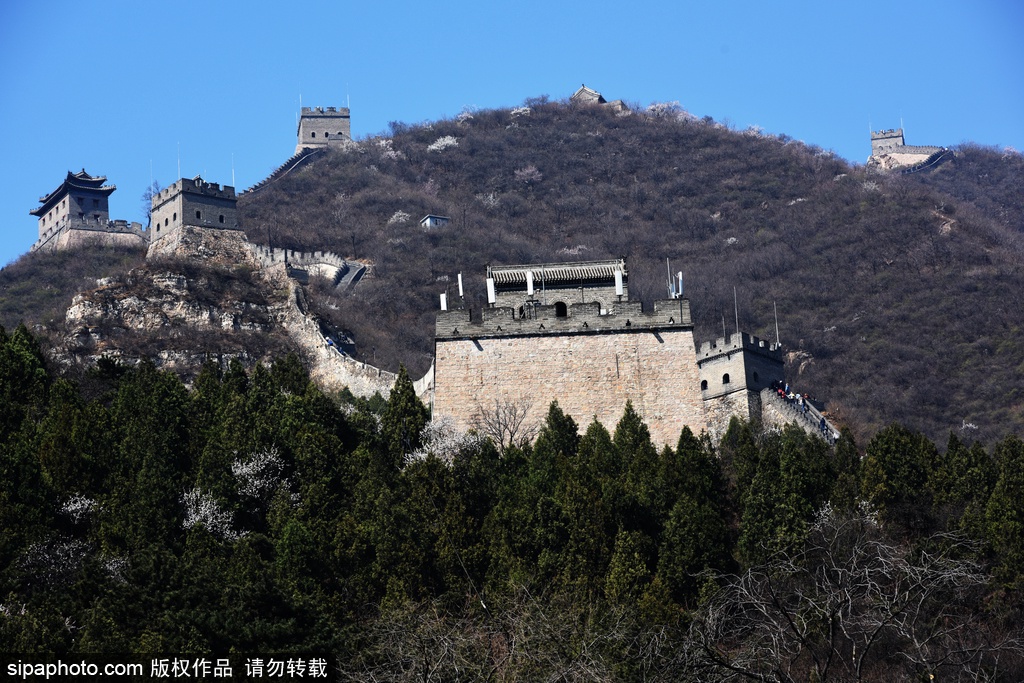 Juyongguan Great Wall is the closest section of the Great Wall to Beijing - a little closer than Badaling.

Located in Changping District, Beijing, Juyongguan is of great military importance since ancient times due to its strategically important terrain. The two strategic passes in the south and north are respectively named “South Pass” and “Juyongguan”. Magnificent mountains embrace Juyongguan; an 18km long valley, commonly known as “Guangou”, spans the middle. In Juyongguan, clear streams belt, green mountains overlap, flowers and trees bloom, and birds sing. Owing to the gorgeous scenery, Juyongguan has been honored as “Juyong Diecui” and one of the “Eight Great Sights of Beijing”.

In the center of stylobate, there arranges the doorway for the passage of people, carriages and horses. Cloud Terrace at Juyongguan is a large-scale fine work of stone carving constructed in Yuan Dynasty. Initially, there were 3 white lamaist pagodas. Unfortunately, they were destroyed at the turning of Yuan and Ming Dynasty. Subsequently, “Tai’an Temple” was constructed on the stylobate. However, in the 41st year of Kangxi Reign in Qing Dynasty (1702), the temple suffered from fire, leaving Cloud Terrace alone. The preserved plinths on the top of stylobate were the remains of the palace of Tai’an Temple in the Ming Dynasty.

An overall repair was conducted to architectures in Juyongguan in 1992, revitalizing its former magnificence. The natural landscape of Juyongguan surroundings is very gorgeous. Early during Mingchang Year of Jin Dynasty (A.D. 1190 - 1195), “Juyong Cuidie” has been listed into “Eight Great Sights of Beijing”.

Why Visit Juyongguan Rather Than Others

Juyong Pass ranks as the first of the three impregnable passes along the Great Wall (the other two are Jiayuguan Pass and Shanhaiguan Pass). Besides the ancient wall, many old buildings, like towers and temples, can be seen there.

Stairs on the western part are quite steep while the other side is gentler, suitable for people who are energetic and those who are weak in sports. 37 miles (60 kilometers) away from downtown Beijing, it is the nearest section from the city proper.

Geography Juyongguan (pass) is in the 18-kilometer (11 mi)-long Guangou Valley. The pass is one of the three greatest mountain passes of the Great Wall of China. The other two are Jiayuguan and Shanhaiguan (passes). Juyongguan Pass has two 'sub-passes,' one at the valley's south and the other at the north. The southern one is called "Nan (pass)" and the northern is called " Badaling".

The pass had many different names during former Chinese dynasties. However, the name "Juyongguan" was used by more than three dynasties. It was first used in the Qin Dynasty when Emperor Qinshihuang ordered the building of the Great Wall. Juyongguan pass was connected to the Great Wall in the Southern and Northern Dynasties.

The present pass route was built in the Ming Dynasty and received much renovation later. It was a very important strategic place connecting the inner land and the area near the northern border of China. It was also used to defend the ancient city of Beijing. In the middle of the Juyongguan (pass) and Guangou Valley, there is the Cloud Platform gate, also known as the "Crossing Street Tower". It was built in 1342 during the Yuan Dynasty, and made of white marble with a height of 9.5 metres (31 ft). There were originally three white pagodas atop the platform, giving it the name of "Crossing Street Tower". They were each destroyed in the transitional period between the late Yuan and early Ming Dynasties. In the early Ming Dynasty, a Buddhist Tai'an Temple hall was built on the platform. It was destroyed in 1702 during the Qing Dynasty.

The Yuan era Cloud Platform remains. Around the top of the platform are elements such as stone balustrades and a watch post. They remain in the original Yuan style. On the platform are carvings of Buddhist figures and symbols, as well as Buddhist texts written in six languages and scripts:

In the middle of the platform's base there is an arched portal- where people, carts, horsemen, and palanquins could pass through. Many images of people and animals were carved inside the arched gate tunnel and around the portal.

It is a closed loop. You can finish your whole trip without backtracking, in one day. You can also have a half-day tour only visiting half of it.

From south gate (main entrance), you can start your tour either eastward or westward. Stairs in the eastern section are gentler than the western side. Those who are not too fit can pick the eastern route.

When arriving at the north gate, visitors can take a good rest there, and then decide whether to continue the other half or not. If you are too tired to finish the whole tour, you can come back down and visit buildings inside the pass.

Two gate towers are now the best view points to see the full picture of the pass. No. 13 Beacon Tower at the west section is the highest point of the scenic area. You can have a bird's-eye-view of the pass there, too.

Stairs can be very slippery when wet. You'd better check the weather before your visit to avoid bad conditions.

The best times to visit this section are April, May, September and October. In April and May, the green mountains are dotted with beautiful flowers. The ancient wall is immersed in a sea of flowers. In autumn, the flamboyant leaves form another highlight of the scenic area. To have a joyful visiting experience, you should avoid the tour peaks of the May Day Holiday (May 1 to May 3) and the National Day Holiday (October 1 to October 7).

How to get there

There's no restaurant in the scenic area. You'd better take some snacks. Visitors always get sweating. So bringing some bottled water is also necessary.