Yanqing is located in the northwest of Beijing at the foot of the majestic Great Wall and on the banks of the beautiful Guishui River. It is blessed with the best air quality, the highest forest greening rate, the best clean index, the largest wetland area, and the richest tourism resources among the 16 jurisdictions of Beijing.

Yanqing is one of the first national demonstration zones for holistic tourism, the venue of the 2019 Beijing World Horticultural Exposition, and one of the three major competition areas for the Beijing 2022 Olympic Winter Games. This year, Yanqing District was successfully selected as one of the top 5 “2020 Destination Tourism Wish Index” released by Ctrip.com. Therefore, Yanqing’s tourism resources are very rich and of high quality.

Currently, there are three highways entering the hinterland of Yanqing: Jingxin, Jingli, and Jingzang, as well as the well-known “Train to Spring” Line S2, and the opening of the Beijing-Zhangjiakouo high-speed railway has also included Yanqing into Beijing’s one-hour life circle. It has opened up traffic barriers and the choice of multiple modes of transportation has greatly improved the convenience of coming to Yanqing. Today, we would recommend to you the third route of Yanqing self-driving tour: Self-driving Tour of World Horticultural Exposition - Let Both Your Body and Soul on the Road. 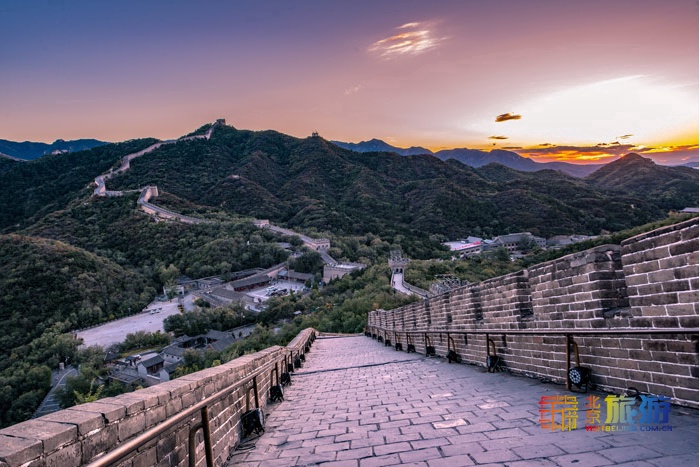 In the selection of “The New Seven Wonders of the World”, it won the first place with its profound history and unparalleled international influence.

It locates close to Badaling Great Wall, with beautiful scenery all around. Its featured iron pot stew is known for stewed goose, with lively killed fish, chicken, lamb chops, beef, with staple northeast China food tortillas, Juanzi, and a variety of vegetables stewed in one pot. When the lid is opened, the heat is filled with fragrant farm meals that you will taste very soon. The restaurant has an elegant dining environment, with a glass walkway on the first floor, and you can look down at the flowing water under a small bridge. There are also cherry trees, which is a perfect place for leisuring and photographing! You can enjoy local specialities while playing here. There is a cool area with mountains and water in the courtyard on the ground floor, and it is a good place for you to keep warm in winter and stay cool in summer. 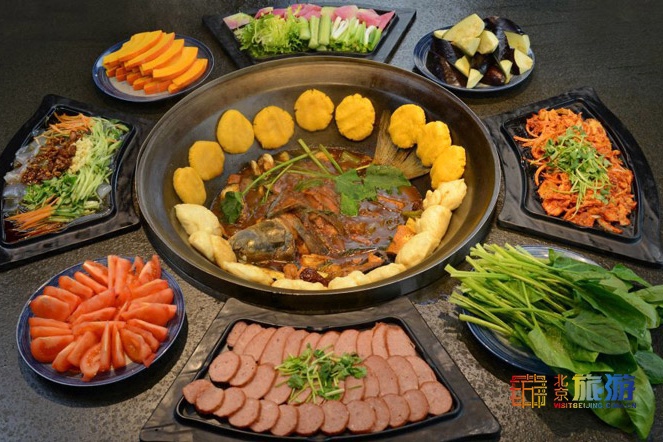 Beijing Expo Park is where the Beijing World Horticultural Exposition was held. In Beijing’s ecological conservation area, Yanqing is blessed with distinct seasonal characters and beautiful natural scenery, covering an area of 503 hectares. In spring, large areas of forests and green areas give people a sense of life; in summer, by the riversides of Guishui is the scent of flowers and sound of birds; in autumn, forests are golden, the water and the sky are blue, which makes people’s mood clear and bright; in winter, everything is silver when wrapped in snow, which is naturally pure. The splendid China Pavilion, the International Pavilion shaped like a sea of flowers, the pastoral market-like Life Experience Pavilion, the Botanical Pavilion known as the raised ground, and the gorgeous and lively Guirui Theater which forms the core venue of the Expo. In the international horticultural exhibition area, there are various foreign exhibition parks with strong exotic styles; in the China Park exhibition area, you can find the exhibition areas with rich local characteristics of various provinces, regions, cities, Hong Kong, Macao and Taiwan keeping your eyes fully occupied.

As the exhibition hall with greenhouse plants as the main exhibition, the Botanical Museum has more than 1,000 kinds of greenhouse plants on show, and there are also some rare plants that broaden your horizon. During the first anniversary of the opening of the World Horticultural Exposition, Yanqing will set off a leisure holiday boom of “Visiting the World Expo when Living in Yanqing”, making the Expo a famous place for taking photos. Later, the Expo park will also hold large-scale music festivals, with on-site performances and other activities providing Beijingers a good place to go for holiday. Beijing Expo Pushen Hotel, or the Longqing Hotel, is located in the northwest of the Expo Park. It is a south China garden-style ancient building with the first official hall of Jiangnan, “Five Phoenix Building” as its core. The hotel consists of a lobby of the grand Anhui style, 61 classic-style rooms, 17 courtyard-style rooms, and a banquet hall with a state banquet reception level. The winding corridor connects the building as a whole.

The hotel sets its position as “poetic”, “Chinese”, and “modern”. The hotel design inherits the wisdom of Chinese ancient architecture construction, abides by the Chinese architectural culture etiquette. From appearance to interior, the decorations and all items in the hotel fit perfectly with the temperament of the ancient architecture. At the same time, it integrates modern design as well as traditional architectural culture with experiential luxury hotels. Also, thanks to the hotel’s unique architectural style, clear historical traces, strong traditional cultural expression, the hotel was the first to be awarded the municipal-level Beijing Suburban Boutique Hotel. 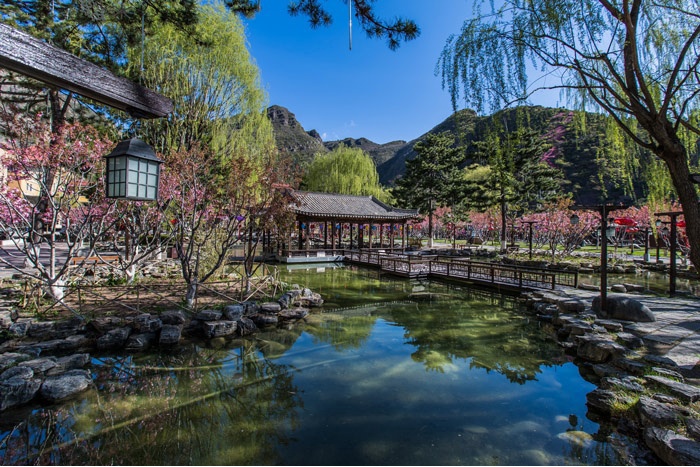 Longqingxia Gorge merges the tenderness and gracefulness of southern China with the majesty and masculinity of northern China. It is a brilliant pearl in the suburbs of Beijing, which is a combination of mountains and rivers. In the midsummer, the temperature in Longqingxia Gorge is cool and the air is fresh.

Longqingxia Scenic Area is of national AAAA-level. In 1986, it was rated as one of the “Sixteen Scenic Views of New Beijing” and has the reputation of “Little Lijiang River and Little Three Gorges”. There are more than thirty landscapes in the scenic area, such as Zhenshan Rulai, Zhongshan, Fengguan Island, Axe Mountain, and Moon Bay. There are two temples, King Kong and Shenxianyuan. The auxiliary facilities include hotels and restaurants, Tenglong elevator, Biyi slide, and ropeway, etc. The Longqingxia Ice Lantern was founded in 1987 and has now become an indispensable traditional project for winter tourism in Beijing and even North China.

The latest cherry blossom season in Beijing-from late April to early May each year is the period of cherry blossoms in Longqingxia. The cherry blossoms are fragrant and gorgeous, with 3 to 5 flowers per branch, forming an umbrella inflorescence, the petals are nicked at the beginning, and the colour is mostly white and pink. 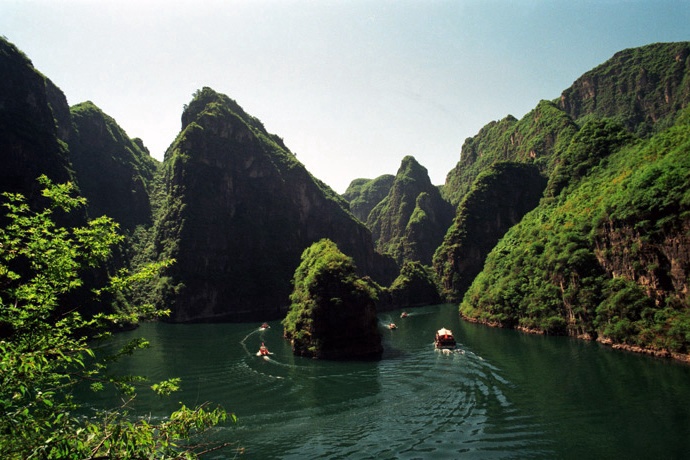 Built on the mountainside halfway up the hill is a 500-meter-long wing slide. It combines leisure, fitness, and mobility, providing safe and comfortable cars as well as thrilling slide, and is the best way to go down the mountain.

Tenglong Elevator, with the dragon’s claws flying high and hanging from the top and bottom of the cliff, is the most astonishing in Asia and has created a Guinness World Record.

The two north and south mountains are towering, and the double-curved arch dam across the two mountains is built in 1973, which is 90 meters long and 72 meters high. It is the highest double-curved arch dam in Beijing, and inside is the 14-mile waterway of Longqingxia Gorge that we are about to take a boat tour. The designed storage capacity of the reservoir is 8.52 million cubic meters. When the storage capacity exceeds 6 million cubic meters, the dam will open the gate to release water to form a 60-meter high water. Waterfalls, the river that flow through waterfalls is the exhibition area where the Ice Lantern Festival is held every year.

Located on the mountain on the right, the Immortal Temple is the second largest scenic spot in Longqingxia Gorge. As the name implies, the place where the gods live should be a Taoist temple, but it also incorporates Buddhism and Confucianism, and the combination of the three forms a unique religious style. This form of temple is rare both at home and abroad. The Immortal Temple was built in the Tang Dynasty. After the renovation and expansion of the past dynasties, a large scale was formed in the Ming and Qing Dynasties, and has always been popular since then.

During the winter, Longqingxia has a long icing period and is extremely cold. The annual Longqingxia Ice Lantern Art Festival is very popular with tourists. People uses Longqingxia natural ice cubes as raw materials, gathers the wisdom and the best scenery of the world, and sculpt the ice into exquisite and transparent ice lantern arts.