Yanqing is located in the northwest of Beijing at the foot of the majestic Great Wall and on the banks of the beautiful Guishui River. It is blessed with the best air quality, the highest forest greening rate, the best clean index, the largest wetland area, and the richest tourism resources among the 16 jurisdictions of Beijing. Yanqing is one of the first national demonstration zones for holistic tourism, the venue of the 2019 Beijing World Horticultural Exposition, and one of the three major competition areas for the Beijing 2022 Olympic Winter Games. This year, Yanqing District was successfully selected as one of the top 5 “2020 Destination Tourism Wish Index” released by Ctrip.com. Therefore, Yanqing’s tourism resources are very rich and of high quality.

Currently, there are three highways entering the hinterland of Yanqing: Jingxin, Jingli, and Jingzang, as well as the well-known “Train to Spring” Line S2, and the opening of the Beijing-Zhangjiakouo high-speed railway has also included Yanqing into Beijing’s one-hour life circle. It has opened up traffic barriers and the choice of multiple modes of transportation has greatly improved the convenience of coming to Yanqing. Today, we would recommend to you the fifth route of Yanqing self-driving tour: Self-driving Tour in “Red Tourism” - Wear Military Uniform, Listen to Historical Stories, and Taste Reminiscent Meals of the Old Days.

Day 1: Re-take the Long March Route in the No.1 Red Village in Shatanggou → Lunch at Cixiao Feast → Changyan Union County Government Site in Piposhi Village, Dazhuangke Town → Check in One Tree Hostel → Dinner at the Hostel 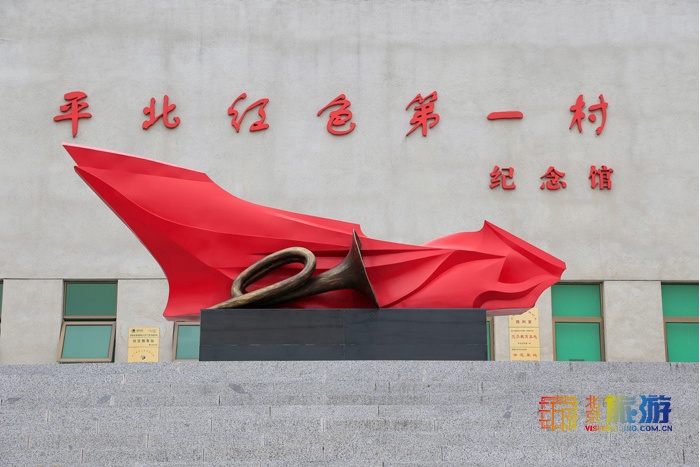 Known as the “Pingbei No.1 Red Village”, Shatanggou Village is located in the west of Dazhuangke Township in Yanqing District, on the southeast side of the main peak of Yanyu Mountain (1278 m) in the Jundu Mountain Range, 10 km from Dazhuangke Township Government. The village area is 12,400 mu, with 105 households and 292 residents. When it comes to the name of “Pingbei No.1 Red Village”,  “Ping” refers to Beijing; “Bei” refers to the triangle area north of Beijing, east of Zhangjiakou, and west of Chengde, with a total area of about 25,000 km², which are under the jurisdiction of Changping , Yanqing, Huairou, Huailai, Chicheng and other 14 districts and counties; “Red” symbolizes passion and enthusiasm, and means early, advanced, and revolutionary; “No.1 Village” refers to Shatanggou Village, Dazhuangke Township, Yanqing District, which was the birthplace of the first rural party branch in Pingbei. In 1938, the first rural party branch in Pingbei was born in Shatanggou Village, with six new rural party members. During the Sino-Japanese War, people in the old region had a tough struggle with the Japanese army. The guerrillas supported the front line; Women’s Rescue Organization prepared food for the soldiers, made military shoes, and sewed up military uniforms; children’s regiment stood guard and sent out signals. All villagers unified together and had made great contribution to the final success. 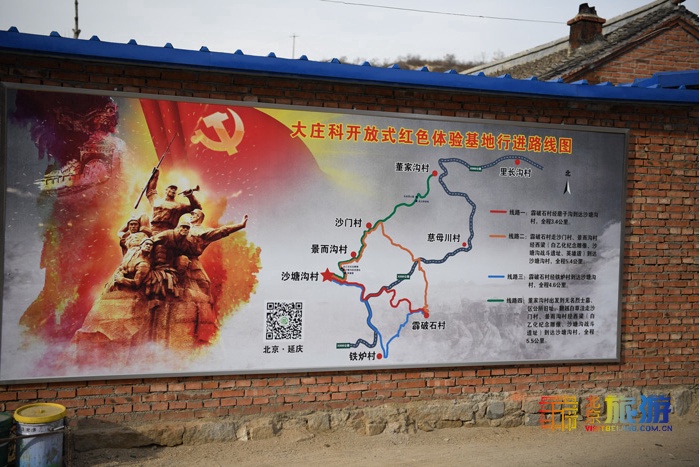 The “Pingbei No.1 Red Village” traditional revolutionary education base was officially opened to the public in June 2003, and an exhibition was held in Shatanggou. It then became a patriotic education base in Yanqing District. Five organizations including the Publicity Department of Beijing Municipal Committee, the Municipal Communist Youth League, and the Capital University Student Union jointly named Shatanggou as the “University Student Social Practice Base”. The education base has an exhibition area of 200 square meters, including three parts: ① Sino-Japanese War exhibition, which mainly introduces the history of the development of Party organizations and members in Dazhuangke District, the birthplace of the revolution in Pingbei region, and how Liu Guoliang and Shi Kening of the  Four Columns of Song (Shilun) and Deng (Hua) led people join the arduous struggle with the Japanese puppet army; ② Liberation War exhibition, which mainly introduces how people in the old six districts carrying out land reform and actively supporting the situation of the War; ③ Socialist Construction exhibition, which mainly reflects the socialist construction and outstanding achievements made by people of Dazhuangke Town under the leadership of the Party. In 2004, the Publicity Department of Beijing Municipal Committee, the Municipal Communist Youth League, the Municipal Committee of the Beijing Education Committee, Beijing Municipal Commission of Education, the Capital University Student Union, and the Capital Spiritual Civilization Construction Commission jointly awarded “Pingbei No.1 Red Village” as the “Capital University Student Social Practice Demonstration Base”. In 2005, it further enriched the education content and invested more than 90,000 yuan to restore 5 scenic spots including the Shatanggou Battle Site, the old site of the first batch of Party members, the old site of “news tree”, and the Eighth Route Army Supply Office. In 2007, it was rated as a municipal patriotism education base. In October 2016, Dazhuangke Town Open Experience Base was officially launched, including activities such as trying on military uniforms, visiting exhibition rooms, retracing the Long March Route, rereading the oath of joining the party, visiting the statues of Bai Yihua, listening to battle stories, commemorating heroes, and other expanding activities.

Cimuchuan Village is named after the myths and legends of Zhongli Ci Mu (Zhongli says farewell to his mother). The culture of gentle parenthood (ci) and filial piety (xiao) in the village is profound, with many typical models of such spirit. Based on the culture of gentle parenthood and filial piety, the villagers use local ingredients to create the special cuisine “Cixiao Feast”, which is low in sugar, salt and oil. It both meets the dietary standards of modern people and is popular among tourists.

The Changyan United Government was established on January 5, 1940. It was the first anti-Japanese democratic government and an important revolutionary base established in Pingbei during the Sino-Japanese War. Its establishment has promoted the Pingbei Sino-Japanese War entering a new stage, making a significant contribution to the final victory of the Pingbei Sino-Japanese War. There is one exhibition room in the old site, with 16 exhibition boards introducing the background and revolutionary deeds of the establishment of Changyan United Government. One Tree Hostel locates in Houlvzhuang Village, Shenjiaying Town, Yanqing District, is designed and built by a professional team especially for team building, and is known for its privacy. The homestay group consists of a reception centre, meeting room, catering, 6 small homestays, 30 bedrooms, and 80 mu of private orchards. At the same time, every homestay and small courtyard pays attention to the creation of garden landscapes, with a north-south atmosphere, with landscape terraces, private gardens, etc., making visitors feel as if they are living in gardens in southern China. Founded in 1989, The Pingbei Sino-Japanese War Martyrs Memorial Park locats at the entrance of Longqing Gorge, a famous tourist spot in the suburbs of Beijing, covering an area of 24,000 ㎡. The main memorial facilities in the Park consist of monuments and memorial halls. The monument was inaugurated in 1989. Its main body has a net height of 14 m and a width of 6.3 m, and the inscription “Pingbei Sino-Japanese War Martyrs Monument” was inscribed by Marshal Nie Rongzhen. The memorial hall was opened in 1997 and expanded in 2007, with a construction area of about 3,000 ㎡ and an extension of 500 m. It mainly shows the historical facts of how military and civilians in Pingbei area resisted the Japanese invasion from March 1933 to September 1945. Since 1995, it gained the titles the Beijing Martyrs Memorial Building Protection Unit, Beijing National Defense Education Base, Capital Greening and Beautification Garden-style Unit, Capital Civilization Industry Standard Unit, and Beijing Advanced Education Outstanding Group. In November 2005, it was announced by the Central Propaganda Department as the third batch of National Patriotic Education Demonstration Bases. In March 2009, the State Council approved it as the fifth batch of Martyrs Memorial Building Protection Units. In September 2014, with the approval of the Party Central Committee and the State Council, it was selected as the first batch of 80 national-level Sino-Japanese War memorial facilities and sites. The Pingbei Sino-Japanese War Martyrs Memorial Park is a venue demonstrating the historical facts of the military and civilian resistance against the Japanese aggression in the Pingbei region, and that Pingbei is an important part of the nationwide Sino-Japanese war. As a national demonstration base of patriotism education, it shows the the praise and inheritance of the spirit of the martyrs, thus stimulating the patriotic enthusiasm of the public. 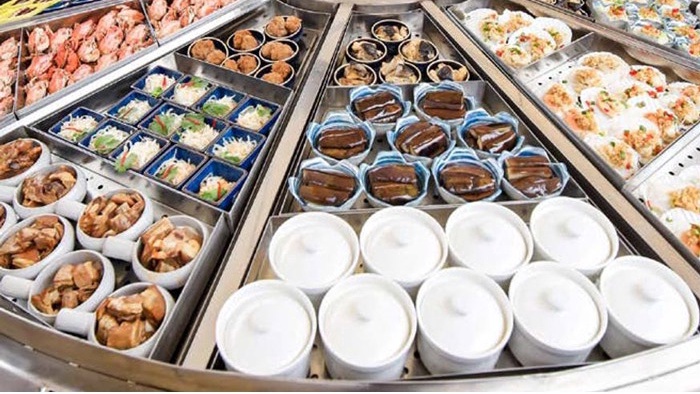