Beijing, as the capital of China, has a long history and splendid culture. At the same time, it has beautiful mountains and rivers, numerous sceneries and beautiful seasons! How to tour Beijing? This may be the question most first-time tourists want to ask. In order to make it more convenient for tourists to visit Beijing, the author offers a series of “X-day tour in Beijing”.

One-day tour tips are as follows:

Tian'anmen Square, located in the center of Beijing, is 880 meters long from north to south, 500 meters wide from east to west, covering an area of 440000 square meters. It can hold a grand gathering of 1 million people. It is the largest city square in the world.

Reminder: in order to know the raising and lowering time, please pay close attention to the relevant articles in the "authoritative release" column on the homepage of our website every day.

Note: it is necessary to carry personal ID card, and it is strictly prohibited to carry dangerous goods. 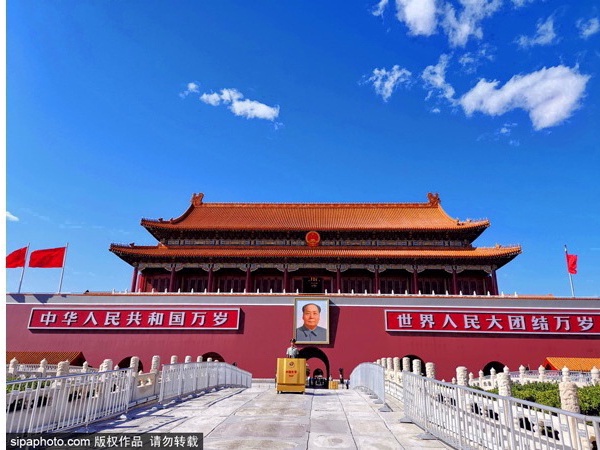 Tian'anmen is composed of a platform and a rostrum. Its base is made of white marble. There are 60 vermilion columns on the city building, and the ground is paved with gold bricks, which is very flat. On the tall and colorful wall, there are two buildings, with yellow tiles. There are nine rooms in the East and West and five rooms in the South and North, which symbolizes the imperial power. 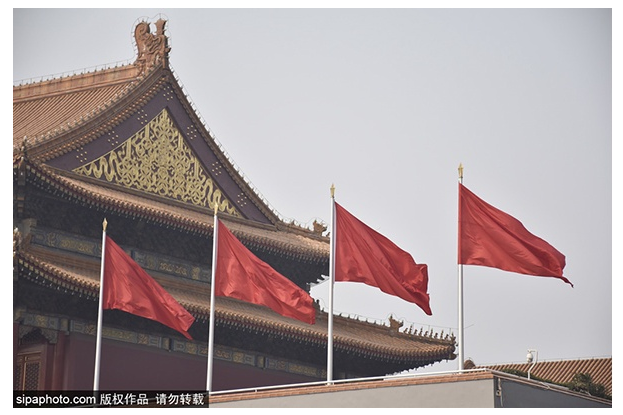 The roof of the main hall has a straight ridge, with a pair of splendid glaze decorations in the shape of dragon at both ends, called “dragon’s kiss”, and nine horizontal ridges, with a “dragon’s kiss” on each ends. So there is a saying “nine ridges seal ten dragons”.

The Dragon kiss is also known as the "smooch", whose tail is shaped like a moon, a bit like a fish's tail and a bit like a bird’s tail. People decorated it on the roof at that time, which was endowed with the intention of eliminating disasters. The windows on the tower are exquisitely made, on which there are golden lines outlining on the red tone, which is extraordinarily royal and noble.

How to buy tickets?

Search and follow "Tour Park" Wechat official account. The ticket can be bought in the section of "e-ticket for Tian’anmen Rostrom. Visitors must make an appointment one day in advance. The daily appointment time is from 4:00 to 23:20. After the reservation is successful, visitors must change their tickets at the ticket office of South Gate of Zhongshan Park with QR code on the day of reservation. Then, take valid ID card and ticket to Tian'anmen ticket office and visit. The adult fare is 15 yuan, and the discount ticket is 5 yuan. (Note: the Tian'anmen Rostrum has been closed since January 24, 2020, and the recovery time will be notified separately; Tian'anmen Square will be open normally. For details, please follow the official website of Tiananmen District Management Committee) The Palace Museum is a special museum. It was founded in 1925 on the basis of the Forbidden City. After 600 years of history, the palace of emperors is finally open to the public.

The lifeline of the Palace Museum, attached to the palaces in it, grows and extends along its cultural context. Entering the Palace Museum and going along the central axis, you can feel the majesty of the royal family from these ancient buildings; you can feel the elegant of ancient palace life through the exquisite furnishings and patterns in the palace; you can learn about the historical vicissitudes of the Chinese people a hundred years ago from the yellow curtain of Dong Nuan Ge. 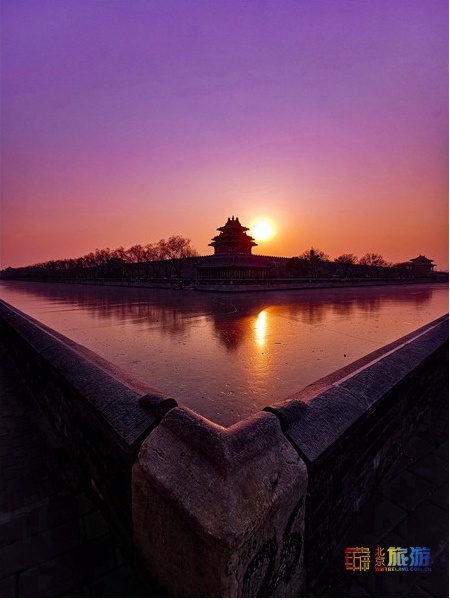 There are 1862690 collections in the Palace Museum, which are very unique. In its nearly one hundred years of development, the Palace Museum not only carefully keeps the treasures left over from the Ming and Qing Dynasties, but also greatly enriches the collection of cultural relics by means of state allocation, social collection and private donation, forming a series of ancient calligraphy and painting, ancient artifacts, palace cultural relics, books and archives, with a total of more than 1.86 million precious collections. Strolling in the Cultural Relics Museum of the Palace Museum, or enjoying the cultural relics exhibition, you can further fully understand the great achievements of Chinese arts and crafts. 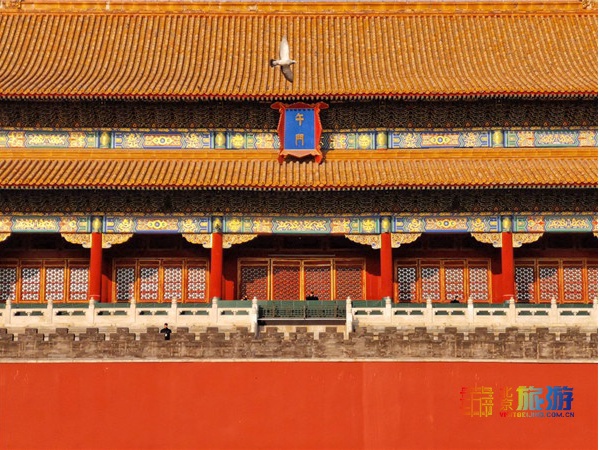 Since the new century, the Palace Museum has carried out the largest ancient construction and maintenance project, which not only makes the old Forbidden City revitalized, but also vividly shows you the precious traditional architectural arts. At present. The researchers of the Palace Museum are doing more in-depth and detailed research on ancient buildings, cultural relics, historical and cultural relics, Ming and Qing archives, books, etc. The establishment of a complete "imperial palace study" system is intended to reveal to you its profound wisdom and spirit.

The Palace Museum, China's largest museum of Chinese ancient culture and art, is inviting you to enter this mysterious land and the paradise of traditional Chinese culture with an increasingly open attitude.

The one-way tour from south to north is carried out in the Forbidden City: Wu Men (South Gate) is only used as the entrance for visitors, and all tourists should enter the Forbidden City from here; Shen Wu Men (North Gate) is only used as an exit for visitors and visitors can leave through Shen Wu Men and Dong Hua Men (East Gate) after visiting. In addition to legal holidays, it is closed all day on Monday.

The peak season is from April 1 to October 31 every year, and the ticket is 60 yuan/person

The off-season is from November 1 to March 31 of the next year, and the ticket price is 40 yuan/person

Note: according to the requirements of the COVID-19 infection prevention and control work, in order to avoid cross infection caused by personnel aggregation, the Palace Museum has decided to be closed since January 25, 2020 (January 1 in Chines lunar calendar) and the resumption of operation will be notified.

During the day, if you still have energy, you can go to Qianmen Street or Wangfujing Street. It is recommended to choose one for one night. 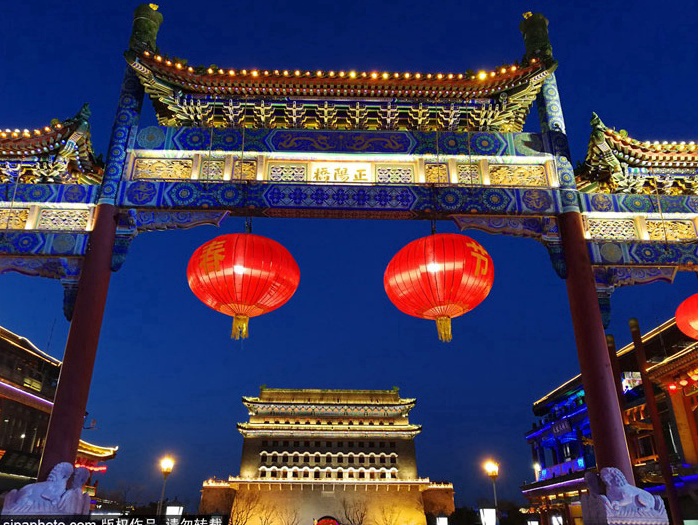 Qianmen Street was formed in 1436. It is located outside Zhengyang Gate, the main gate of the ancient Beijing. It is the only way for emperors of Ming and Qing Dynasties to worship the heaven and model farming at Xiannongtan.

In the middle of Ming Dynasty, due to the fast development of commerce, there were many shops on both sides of the street, which gradually became a commercial street. Its long history made it possible to have many time-honored shops, such as Dabei photo studio, Laozhengxing restaurant, Shengxifu hat shop, Liubiju sauce shop, Tongrentang drugstore, Ruifuxiang silk cloth shop, Changchun Tang drugstore, Neiliansheng shoe shop, Zhangyiyuan tea shop, and Yueshengzhai braised pork shop, and Duyichu sumai shop, which stand on both sides of the street. 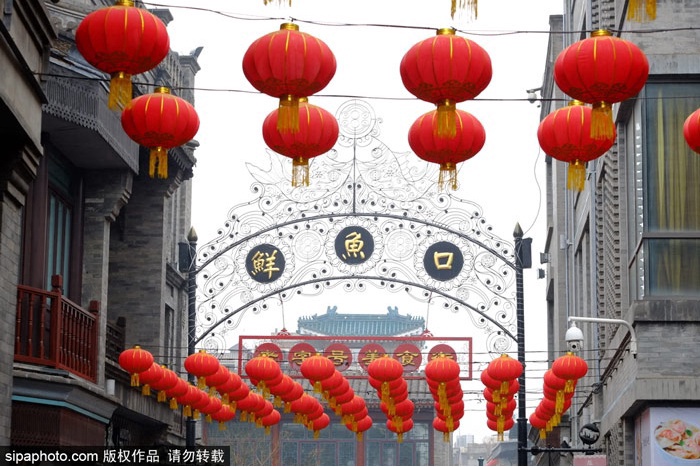 Since 2005, it has been renovated. After restoration, the architectural style of the 1920s and 1930s has been restored, and the charm of the traditional architectural culture of old Beijing has reappeared. 76% of the buildings on both sides of the street has been built as they were and 24% has been slightly modified. With a total length of 840 meters, the street has restored the landmark buildings of "Wupai Archway" and "Baishiyu Road", and "Dangdang bus" has also reappeared in the world. In the design of furniture and lighting, Beijing elements are adopted, such as street lamps in the shape of birdcage and rattle-drum and flower bowls in the shape of stone drum and Taiping cylinder, and the Chinese style long narrow tables match with the historical buildings on both sides, which becomes a beautiful scenery line of "Humanistic Beijing". 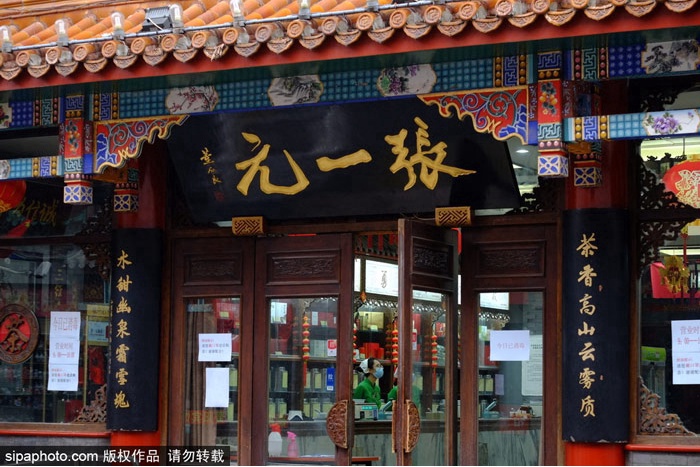 On September 28, 2009, before the 60th birthday of the People's Republic of China, 103 businesses opened here, 79% of which are Chinese brands, 21% of which are international famous brands, including 21 old brand businesses. It realizes its goal of “combining the ancient and the new”. The old street is gradually entering the most prosperous new period. 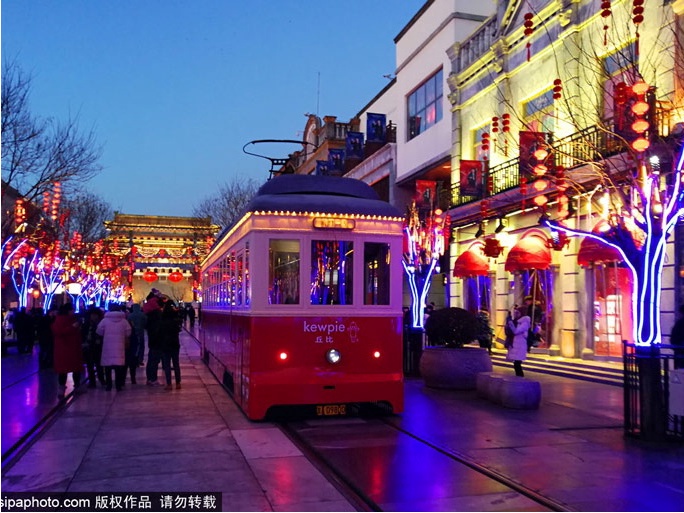 The original type was a large carriage, with the lower body brown and the upper body yellow. It depended on two things to run. One was the track, which is different from the track on the railway. It was embedded in the ground. The wheels of "Dangdang bus" were stuck in this track to forward. The second was the power equipment on its roof, which was connected to the wires in the air to get power. Because the power equipment on the roof was like girl’s braids, people also called it “braids on the roof”. When it moved, it still swayed left and right although it was comparatively steady. If there was a pedestrian or vehicle on the way, the driver would step on a pedal and the bell would make a "Dangdang" sound.

Today's "Dangdang bus" has been restored to its original structure. It can run for 16 kilometers in one charge, with more than 50000 cycles of charge and discharge. The long “braids” on the roof are also removed. The remaining is just a decoration.

Here are two "Dangdang buses". Their names are "Qianmen No.1" and "Qianmen No.2". It takes less than 10 minutes to drive on 840-meter track. There are two stations, Wupai Archway and Zhushikou. The two separated tracks at Yueliangwan lead to the east and west respectively. They are specially used for maintenance. The track adopts resin fixation technology.