In the special period of the epidemic, China's strength and spirit have been praised by the world. Let’s enjoy the different traditional cultural forms, such as the Jingdong Drum, Shadow Puppets, Ventroloquism, China Allegro and Beijing Qin Shu, which are very inspiring. The Great Love represents the love from all the people to help the infected people; Looking Forward to Triumph shows the strong will to win the battle against the epidemic; Eight Armed Nezha Fights Against the Virus displays the heroic spirit of people facing the epidemic, all of which give you the dedication of love and strong faith.

When medical workers are fighting against the virus, the artists are also taking action! Now, let's take you to enjoy the artist works created for the fight against the epidemic!

This Spring Festival is very special

People across the country are concerned about Wuhan

All do their best to help Wuhan

The whole nation has joined the epidemic war

Fight against the virus together

Everyone should contribute to it

Don't cause unnecessary troubles to the society

Don't believe in and spread rumors

Let's fight against the virus together

In the face of this sudden disaster, countless people have participated in the anti epidemic war and sacrificed themselves to build a security barrier for everyone. In the face of the epidemic, they are not afraid of difficulties and obstacles; they go all out. No retreat unless win…

Stories of the fighters on the front line have touched the hearts of millions of Chinese people. including Chen Jinbang. As the head of Art Troupe of Beijing Jinbang Art Garden and member of China Quyi Association, he wrote for the current and for true stories. Based on his true feelings, he has written the work The Great Love, spreading positive energy and boosting spirit for us.

It’s the time to reunite

First class plan was taken across the nation

Cut off the source of infection

Everyone followed the order and took actions

Helped Wuhan with no hesitation

The Army rushed to the front line

There is no gunpowder in this war

Doctors and nurses are asking to fight

No pay, no life or death, they all said

They were full of courage

Their sweat soaked their clothes

Care for them all the time

Premier Li was present on the spot

Deployed and instructed in person

Tried his best to fight

The public is lucky to have him

He is a doctor named "Zhong Nanshan"

He’s a benchmark in medicine

Is present in front of every outbreak

Takes the lead with no fear

His behavior is moving

We are moved by your spirit

We are worried about your safety

We look forward to good news

Unite to fight against the epidemic

Unite to win this war

When the epidemic is over

The Great Love will be spread to everywhere

The Great Love uses the language easy to understand and catchy melody to publicize the knowledge of epidemic prevention, extol the front-line staff, and enhance people's confidence in overcoming difficulties. As soon as the work was launched, it was loved and praised by the masses.

Shadow puppet is a kind of traditional Chinese folk art, which has a history of more than 2000 years. The puppet is made of the skin of animals or paper cards. In 2011, China's shadow puppet was listed in “the list of intangible cultural heritage protection”.

Now let us enjoy the shadow puppet "Eight Armed Nezha Fight Against the Virus" and figure out how Nezha and Dragon King beat the virus together.

Ventriloquism is a kind of folk performing art, which is a combination of acrobatics and quyi. In the ancient time, it was called “onomatopoeia”. Ventriloquism is one of the precious heritages of Chinese culture and art. It has a long history, which can be traced back to the Warring States period. At that time, a man named Meng Changjun escaped from Hangu Pass by imitating the sound of a cockcrow. This is the earliest record of ventriloquism, but it was only used for military purposes at that time. The real beginning of folk performance was in the period of Emperor Huizong of Song Dynasty. This kind of art is one of the one hundred opera performances in Qing Dynasty. The performer hides behind the cloth curtain or the screen, and then uses the mouth, teeth, tongue, lip, throat and other body parts to make a voice to imitate various sounds, such as baby crying, bird singing, etc. When the performer is performing on the stage, the combination of actions and language introduction can enhance the sense of reality.

Now the ventriloquism has developed into the art of the mouth, which is the development of oral art. During the Tang, Song, Yuan, Ming and Qing Dynasties, there were artists such as Wen Baniang, Fang Zhailang, Guo Maoer, Xiao Jintong, Yin Shilin (Kai Kouxiao), and Huamei Zhang. They and their ancestors made great efforts to spread this ancient folk art to this day.

"Love Fills the World" is a literary work created by Ji Yong, the inheritor of the intangible cultural heritage ventriloquism project, to express the theme on fighting against the epidemic. In the whole nation’s anti epidemic campaign, many touching people and things deserve our praise. As one of the intangible cultural heritage projects in Tongzhou, ventriloquism is used in a unique way to cheer for Wuhan and China.

In this critical period of national anti-virus campaign, countless medical staff have rushed to the front line without fear. They can’t have a reunion with their families, but choose to carry on with a heavy load… 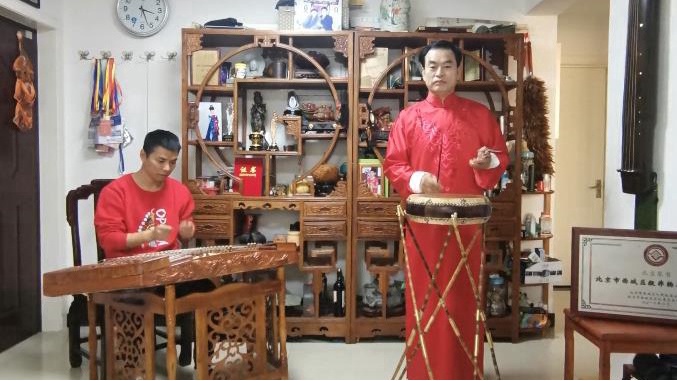 And in the rear of the battlefield against the epidemic, there are many people who spread warmth in their own way. Wang Shucai, the inheritor of Beijing Qin Shu, pays tribute to the medical staff who are fighting on the front line with his work “Though the Wind and Rain”.

Both the front line and the rear support are contributing to the fight against the epidemic. We help each other; we support each other. With our all-out effort, we will win the anti-epidemic war.