Intangible cultural heritage refers to a variety of intangible forms of traditional culture, which are closely related to people's life and are inherited from generation to generation. When staying at home, arrange some activities for yourself. Making diabolo, Peking Opera facial makeup and traditional Chinese medicine sachet can not only exercise your body and mind, but also learn new knowledge. Come on, let's do it!

The above pictures of diabolo products are a series of scenes. The designer combines Chinese folk culture with modern culture. For example, he designs a tree with diabolo as the basis, which represents the prosperity of the country; Monkey King can subdue demons; spiders like to fall from the sky; magpies represent the arrival of happy events.

Zhang Guoliang, an inheritor of diabolo production at Tongzhou district level of the intangible cultural heritage. Born in Beijing Tianqiao in 1956, he studied diabolo making and traditional Chinese crafts (root carving, woodcarving, pipe, etc.) with his father when he was young. He is the successor of Diabolo Zhang in Beijing. He mainly makes traditional bamboo diabolo by hand. On the basis of ordinary diabolo, he has developed high-quality diabolo, such as Olympic diabolo, Chess diabolo, 70th National Day diabolo, and many other types of diabolo.

The Facial Design of Beijing Opera

According to your own preferences to design the facial design, and then make the mold. After the mold is dry, repair the mold and wait to make the base.

Put the clay in the plaster mold to make the base. Then put it in the shade and wait for it to dry. Not expose to the sun. After it dries thoroughly, polish it and apply it with white paint. Or paste paper in the mold layer by layer. There needs to be more than ten layers. Then take it out from the mold, put it in the shade to dry, and do not expose to the sun. After the base is dry, brush it with putty and then wait for it to dry when the putty is smooth. Polish it with sandpaper and then brush white paint. To make the plaster mold, silica gel mold is used. To make the first layer, mix the plaster powder completely and apply to the silica gel mold. After the plaster becomes hard, paste a layer of cloth. And then pour another layer of plaster. Wait for it to dry and then polish and paint white. Then you can prepare to paint.

First of all, make some drafts and select your favorite patterns. The stroke is mainly the meticulous brushstroke. The color is mainly gouache, poster color, and Chinese painting pigments.

After coloring, lacquering where it is needed. Then dry it.

Decorate the facial make up with the beard and helmet.

The color modeling of the facial design of Beijing opera has a wide range in themes and artistic diversity in aesthetics, which can be said to be a profound expression of Chinese culture. There are many kinds of the facial design of Beijing opera, with rich themes, bright colors, solemn and elegant artistic charm, with more than 400 types. The facial make-up is suitable for all the people. Different producers and painters have different aesthetic tastes. Different facial make-ups express different characters, showing different expressions of joy, anger, and sadness. Since the ancient time, people have the tradition of wearing traditional Chinese medicine sachets, which can increase the body's fragrance and inhibit the spread of pathogens in the air. Luo Zijie, the representative inheritor of intangible cultural heritage project "traditional fragrance making technology" in Chaoyang District, will tell us how to make a simple "Taiyue sachet". This sachet is mainly made of atractylodes lanceolata and agastache, with some perilla, borneol and benzoin. It has the functions of dispelling cold and dampness and strengthening spleen. It can also smooth qi in the body, harmonize the stomach, refresh the brain, and increase the vitality of the lung.

Gourds have been used to make handicrafts since the Ming Dynasty. During the Qing Dynasty, the gourd production reached a really high artistic level in Lanzhou province and became a tribute to the imperial household. At that time, the "fire baking process" combined the wooden gourd with the traditional Chinese pyrography skills. The brand iron is used as the pen. With the style of traditional Chinese painting, various images are painted on the smooth and hard surface of the gourd, such as figures, landscapes, flowers, birds, and wild animals, With the artists' understanding of art and their skilled use of the brand iron, the created pictures present different shades of colors, including brown, black, yellow and white, which is very expressive. 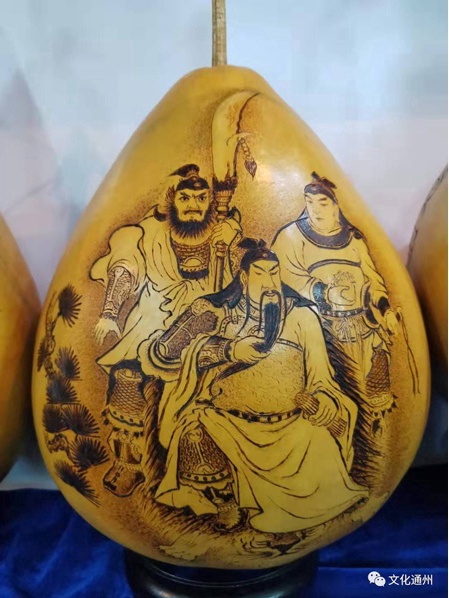 The original color of gourds has the basic tone of ancient painting. Famous Chinese painting works are imitated on it. The lines are smooth and the form is lifelike, which gives people a refreshing feeling. The art of pyrography makes gourd ascend to the art palace from farm fruits and melons, and becomes a kind of traditional folk art with simple nature and elegant beauty, which has a high value of appreciation and collection.

Dough modeling is also known as dough figure. The craftsman of dough modeling is commonly known as the dough maker. Dough figures are made of flour, glutinous rice flour and other raw materials with dyes of various colors. Then craftsman use a plastic knife, scissors and other tools to shape much colored dough into various colorful figures and animals. It is simple, lively, and colorful with national characteristics. It is a folk art known to all. 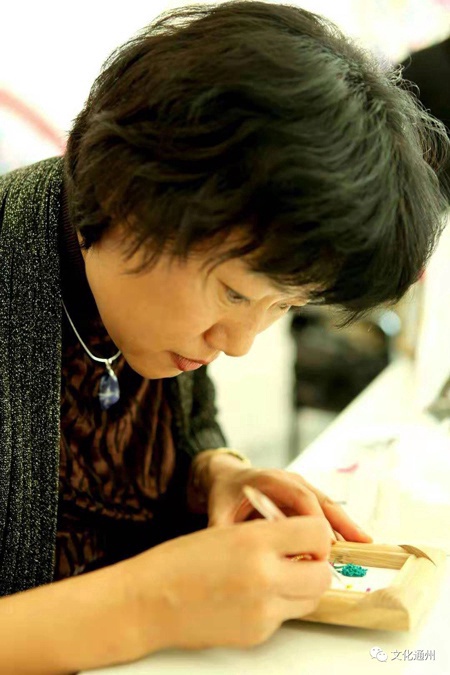 The art of "Dough Figure Tang" is mainly based on family inheritance, and also has the inheritance of teachers and apprentices. Tang Zibo, the founder, first imparted his unique skills to his elder brother Tang Yougui and his young brother Tang Youyi, forming the “Three Tang Brothers”. With a large number of successful artistic works, they established the status of Tang's dough modeling, greatly increased the reputation of "Dough Figure Tang", and took the lead among Beijing dough modeling artists. In particular, Tang Youyi's artistic works "Celebrate the Birthday” and "The Elders in Clothes of Man Nationality" are still collected in the Palace Museum.

Dough modeling is a vivid, historical and three-dimensional memory. After more than a hundred years of inheritance, it has become a folk handicraft that can be appreciated by people all over the world, which deeply touches the Chinese people's feelings.

Today, Tang's descendants have inherited this art and continued to spread it, which adds a lot of fun and enjoyment to people's life.

Since the outbreak of the COVID-19, front-line medical workers have been called "the most beautiful and the loveliest people in the world". Yang Yue, a young girl and inheritor of paper-cutting of intangible cultural heritage project in Haidian. She teaches us to use paper-cutting to show the great image of medical staff. During the epidemic, Yang Yue also created a paper-cutting work "The Will to Win". The main body of the work is the "bi(必)" in Chinese characters, and the "dot" in the middle of the Chinese character is represented by the picture of corona virus. The slash in the middle is like a sword splitting the virus. Out of the virus shows the arm of the patient. In order to save the patient, the medical staff in protective clothing kneels on the ground to save the patient's lives.