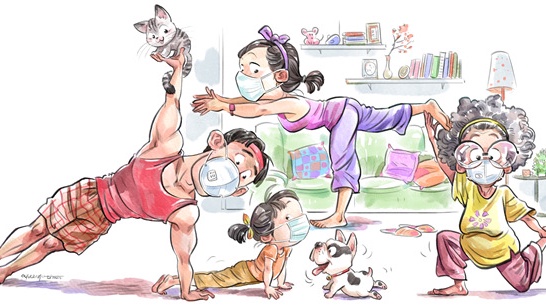 Exercising in your residence keeps you in a fit state of mind and body.

Long Kang has just become a "keeper" and is building up his body and mind to face life's challenges.

The Beijing resident bought a yearlong membership at the online exercising platform Keep early this month.

"I feel like having to exercise, since it boosts immunity, which will, at the end of the day, be the ultimate defense against the novel coronavirus," Long says.

The membership costs the 32-year-old a little more than 200 yuan ($28.65) and gives him access to customized exercise sessions and detailed workout instructions.

Long is one of the many who have taken to keeping fit at home by using such applications. And, at this crucial time when people are urged to stay at home to keep healthy, to help contain the spread of the epidemic, doing exercise at home to burn calories and stay positive is turning out to be a cool new trend.

Long likes the convenience that the mobile fitness guidance offers.

Long is now exercising on a daily basis and tries out different aerobic and anaerobic regimes on the Keep app to enhance his physical strength.

"The tennis court where I usually play has been closed, and so is my gym," Long says, adding that he and his friends all agree that the shutdown is the right thing to do given the circumstances.

Hi-Lefit, a Hangzhou-headquartered gym chain, shut all of its nearly 500 branches countrywide on Jan 27.

The measure was undertaken to ensure safety of its more than 4 million members and followers, says Yang Shuting, Hi-Lefit's brand officer.

"We'll extend the membership accordingly, and the opening time will depend on developments and State regulations," Yang says.

Yang predicts Hi-Lefit's offline income will continue to drop in the following months and it will also have to deal with such challenges as customer account management.

Yet, the company, based in East China's Zhejiang province, might be considered lucky compared with other conventional gym operators, thanks to its online and app-based fitness tools.

"Because we don't have a prepaid mechanism, there are no problems such as consumer conflicts," Yang explains.

Despite being affected by the outbreak, Yang is still optimistic about the future of the fitness market.

"The outbreak will make the public pay more attention to health," Yang says.

He expects the market will grow rapidly in the next decade, especially after the country's ongoing focus on boosting national fitness.

"We might see a wave of people joining the gym after this," Yang says.

Hi-Lefit has encouraged all of its personal trainers to make videos that offer online tutoring and answer queries from people who exercise at home through any platform, including WeChat groups.

To date, those training videos have been displayed on popular short-video sharing platforms, including Kuaishou and Douyin, known as Tik-Tok overseas.

Such training videos have been well-received by more and more people.

"Our goal is to deliver quality broadcasts to our users."

Now, several TV stations and sports bureaus have joined Hi-Lefit's campaign, and Yang says it is likely to reach more than 100 million people, who will work out by following the online training videos.

The increasing public attention to fitness has also been reflected by the rise in search requests for the Keep app on the Chinese search engine Baidu.

Searches for the app since Jan 25 have grown by about 38 percent compared with the same period last year, Baidu's results show.

There's also a growing focus on scientific fitness on various social medial platforms, according to Zheng.

The app now has about 200 million followers and has developed a stay-in exercise program with the General Administration of Sport.

Live broadcast training is also offered to get the public moving.

So far, Long has strictly abided by his recommended regime every day.

"All the sweating after the exercise somehow makes me feel better during my isolation at home," he says.

"Even if the club opens, my friends and I have all agreed to wait for a while, since it will be safer not to go to a crowded place and it's the responsible thing to do for the safety of both others and ourselves."