Beijing's colorful leaves landscape is expected to last to late November this year. And here, I would like to introduce landscape features of 15 parks in the golden autumn to you.

Mutianyu Great Wall is a national 5A level tourist attraction and a world cultural heritage. The scenic spot boasts hundreds of trees, like maples, pine trees, peach trees, pear trees and apricot trees sprawling from valley, mountainside to mountaintop. In late autumn, various trees turn colors, or in bright red or in dazzling golden yellow as the weather becomes cold.

Climbing to the majestic Great Wall and looking far, you can view red leaves all over the mountain and the Great Wall forming a delightful contrast. In this attraction, citizens can enjoy the charm of maple leaves adorning the Great Wall.

The park is home to more than 50,000 color-leafed trees like smoke trees and Shandong maple. High altitude and large difference in temperature make leaves of these tree turn red earlier than those of other place and enjoy the brightest color.

In the golden autumn, red leaves all over the mountain and winding Great Wall form a grand spectacle. In addition to ascending a height to enjoy a distant view, tourists can ramble through the red leaves forest, getting closer to red leaves and the ancient historical relic.

The best time for sightseeing: October 8-30

Xishan National Forest Park has gradually been painted in the color of the autumn. Shandong maples, set off by Chinese arborvitaes and Chinese red pines, add the beauty to vast crystal-blue sky; viewing from the near, a mountain of red leaves is as red as the bumper fruit.

Among all red leaves appreciation areas, Hongyeling (Red Leaf Mountain Ridge) is the best. North Fahai Temple in the north and the hill ringed on three sides by mountains are covered with red leaves, as if a flock of reborn fenghuangs (mythological birds) in the early morning mist.

Moreover, nearly 20-hectare Shandong maples, receiving a uniform command from the nature, dye the slope red one night and create a sense of autumn.

The autumn is the season to appreciate red leaves, when Badachu Park is embellished by yellow wild flowers and more than 100,000 color-leafed trees.

This park is an ideal place to climb mountain and appreciate red leaves in the fall. There, peaks rise one after another from gutters and valleys; green pines and cypress and red-color leaves add radiance and beauty to each other; and chrysanths in various colors spread everywhere, making the park extraordinarily magnificent and charming.

More than 100,000 color-leafed trees totaling eight species turn red and spread from the foot to the top, drawing a colorful painting interspersed with green pines and cypress and bright-yellow gingko leaves. Baiwang Mountain Forest Park is a national AAA tourist attraction. The park is endowed with wonderful landscapes where can see a fascinating sea of red maple leaves and golden ginkgo leaves.

In the golden season, Baiwang Mountain is covered with maple trees dressed in charming colors. At the moment, the colorful leaves forest is home to more than 20 species of trees including smoke trees, Shandong maple, Rhus typhina, Fraxinus chinensis, Autumn Fantasy maple and Autumn Blaze maple, with a total area of over 33 hectares. Embodying the beauty of nature and culture, this park is intoxicating.

Named as “Dafang Mountain” in ancient times and covering a total area of 300 hectares, the park is situated in the west of Fangshan District and the middle of Western Hills. Ziyun Peak, the main peak, is 860m above sea level.

The park features distinct natural and cultural resources, and is well-known for the “nine caves, twelve peaks and seventy temples and nunneries” all the time.

It is rich in geological relics like peak, valley, cave, pit, cliff and hill and is the home of many ancient tree species. For instance, the plant landscape area dominated by cypress, oak and blue sandalwood is pretty splendid.

The autumn is a good time to appreciate the fantastic scenery, where various oak trees and smoke trees enrich each other's beauty, adorning magic Shangfang Mountain with a colorful garment. The Old Summer Palace takes “ruins” as the theme, reappears the erstwhile resplendence of magnificent natural sceneries, and is abundant with plant landscapes. There are a variety of colorful tree species like gingko, maple tree, Fraxinus chinensis, hard maple and Smoke trees. Notably, a 1,000m-long gingko avenue has formed at the junction of three gardens in the Old Summer Palace.

In the refreshing autumn, golden gingko leaves, bright-red maple leaves and colorful chrysanths, along with common reed, lotus and other aquatic plants on the lake, form a picturesque garden landscape. As a fresh breeze whispers, color-leafed plants sway their graceful dancing postures, as if showing the unique charm and artistic conception of the “Garden of Gardens”.

When autumn comes, it features gorgeous sceneries, and enjoys gentle mountain breeze and colorful flowers in full blossom. You can immerse yourself in nature, climbing to the top of Jile Peak by cableway or on foot, or appreciating the sea of red leaves, or overlooking the bustling downtown area.

Beijing Garden Expo Park is a patchwork of over 30 million trees in abundant species, like Shandong maple, smoke trees, Acer rubrum and gingko. All of them form a spectacular scene in dotted colors.

Starting from No. 2 Gate in the east, the gingko avenue stretches to the foot of Yingshan Mountain in the west. A total number of 800 ginkgo trees are planted along the 3km avenue. When the autumn breeze whispers, yellow leaves dance trippingly in the air and gently touch the ground, weaving a golden carpet across the park.

At the other end of gingko avenue stands erectly Yongding Tower, and on both sides are paved with colorful leaves. These sceneries and exhibition gardens add beauty to each other, creating a unique autumn landscape.

Nanhaizi Park borders on the South Fifth Ring in the north, Huangyi Road in the south, G 104 in the west and Liangshui River in the east occupying an area of 8.01km2.

The park is the home of about 3,768 color-leafed trees, including sophora japonica 'winter gold’, Salix X aureo-pendula, smoke trees, gingko, Shandong maple, Acer elegantulum, Acer negundo'Aurea’ and Acerplatanoictes. In the golden autumn, these plants are dressed in beautiful colors, creating a spectacular scene. The landscape of “southern park in autumn breeze”, one of the Ten Scenic Spots in Beijing, refers to Nanhaizi area.

There are three climbing routes, namely, middle route entitled as “Lijing Xiangdao” from Longquan Temple to Shangfang Temple, north one named as “Xiongguan Mandao” starting at God Spring and ending at Feilai Stone Tower; south one dubbed a national hiking trail and with one scenery by one step.

This park is embellished with red leaves everywhere, therefore, all three routes are the best choice to climb mountain and enjoy sightseeing in the fall.

Especially in the golden season, these plants have been dressed in enchanting colors, making the park an ideal place for tourists to relax themselves in fantastic sceneries.

The Shangxiang Ancient Road, especially at the section from Jiufeng Peak (the main peak) to Wangjing Tower, is planted with large area of Shandong maples. Thus, here is named as “Red Leaf Valley” - a sea of red leaves.

In the golden autumn featuring crystal-blue sky, Miaofeng Mountain Scenic Spot is dubbed a rare land of idyllic beauty by travel enthusiasts, where the serene valley becomes more attractive in the singing of birds and fragrance of wild flowers.

Here you can explore the elegant demeanor of the colorful world. Notably, maple forest nestled in mountain massif has been dressed in charming colors, unfolding a picture scroll of “the beauty of autumn”.

The best time for sightseeing: October 1-30 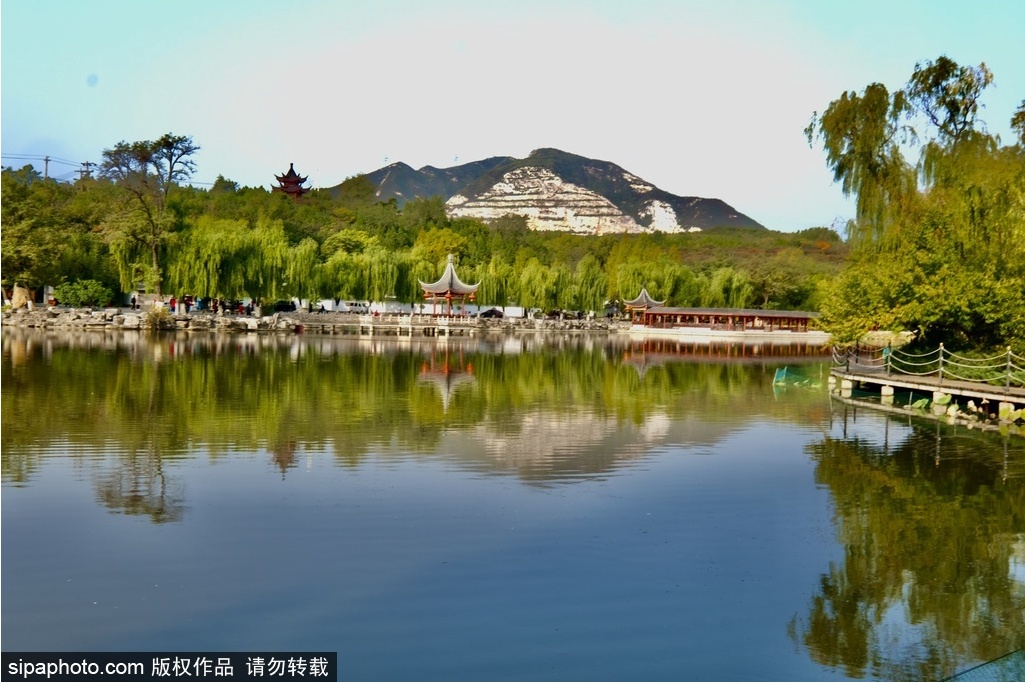 Beigong National Forest Park is a national AAAA tourist attraction and one of the most-influential national forest parks. The park is the home of over 20 tree species including smoke trees, gingko, dawn redwood, Fraxinus bungeana, Koelreuteria paniculata, Tilia mandshurica Rup et Maxim, Shandong maple and purple-leave tree, forming a forest of colorful leaves with an area close to 3,000mu.

In the fall, the park is dressed in enchanting colors. The  six scenic areas share crystal-blue sky and green rippling lake. There, mountain spring hums a tune, lotus leaves enrich the charm of red sun, common reeds dance elegantly in the air and leaves are brightly colored. All of them form a picturesque ecological landscape.