It’s the perfect time to go on a trip on a crisp autumn day. This time we sort out some “red landmarks” in the capital, so let’s review those extraordinary times in Awakening Age together and have a “special” trip.

The Red Building of Peking University

In 2021, the TV series Awakening Age gained widespread attention upon its broadcast, with 3/4 plots in the play taking place in the Red Building of Peking University. In October of the same year, the renovated Red Building was officially listed as the Memorial Hall of the Early Revolutionary Activities of the Communist Party of China in Beijing and reopened to the public, thus this new red landmark continued to attract attention.

The Red Building of Peking University was originally the seat of the administrative department, the first college (liberal arts) and library of Peking University. It was built in 1916 and completed in 1918. The whole building is built with red bricks and red tiles, so that’s how it got its name.

The Building was the base camp of the New Culture Movement and the birthplace of the May Fourth Movement. It was the main front for the spread of Marxism in early China and the main venue for the early Chinese Communist Party. Mr. Cai Yuanpei worked here when he was the president of Peking University; Mr. Li Dazhao served here as the director of the Peking University Library; Mr. Chen Duxiu, head of liberal arts, edited the New Youth here, and Mr. Lu Xun lectured here. The thirty-sixth classroom located in the southwest corner of the second floor is the largest classroom in this Building, where Li Dazhao and Lu Xun both lectured here.

The former site of the Second College of Peking University

The former site of the Second College of Peking University (the former building of the mathematics department of Peking University) is located in the former Imperial University of Peking in the area of No. 55 and 59, Shatanhou Street, Dongcheng District. The building was built in 1904, brick and timber structure, two stories high. The building was built in 1904, with a brick and wood structure, and is two stories high. It was once an important part of the Imperial University of Peking, the first national comprehensive institution of higher learning in modern China, and was renamed the Mathematics Department Building of the Second College of Peking University in 1919, where Li Dazhao and Chen Duxiu had lectured. In March 1919, the young Mao Zedong listened to Li Dazhao’s lecture in the sixteenth classroom of the building. In May 1920, the Marxist Theory Research Society of Peking University held revolutionary activities such as the celebration of May Day here, and it was also an important venue for the Beijing Socialist Youth League and other early organizations.

Today, walking in the Science Building of the Second College, the wooden floor stairs make a thumping sound. These echoes that respond to history are integrated with this historical building and condensed into a tradition and spirit that will last forever. 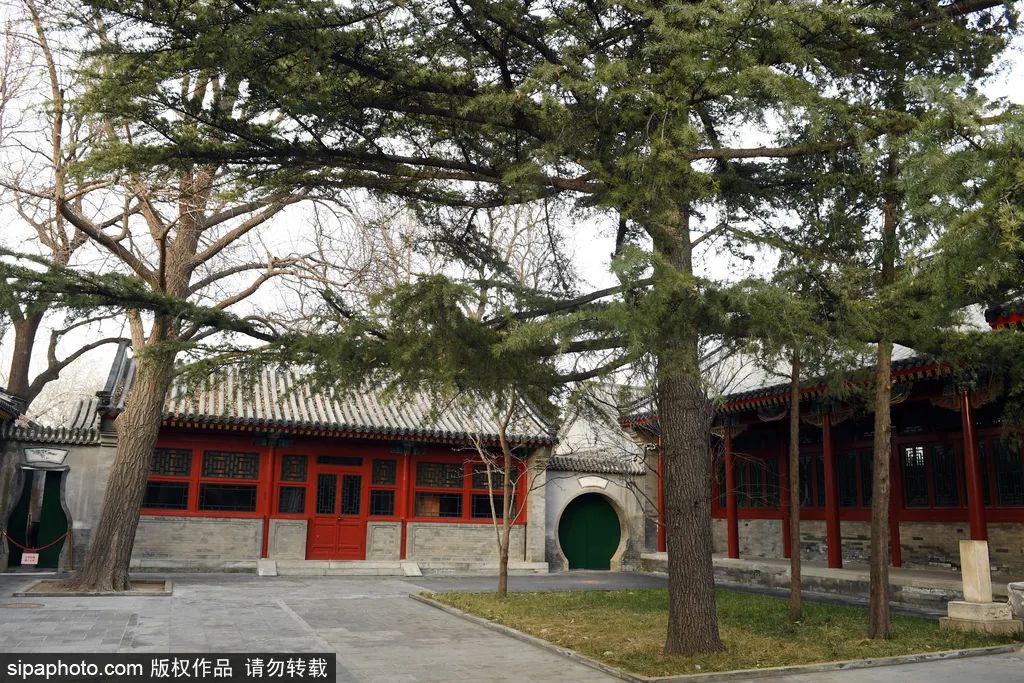 There is a building with a Western-style structure and a Chinese-style tile roof at No. A20, East huangchenggen North Street, Dongcheng District of Beijing. In the early 20th century, the Peiping Sino-French University, coveted by progressive students, was established here.

In the teaching building and auditorium of the former Sino-French University, there are two special exhibitions “The Early Spread of Marxism in China” and “The Glorious Course of Adapting Marxism to Chinese Conditions.” The two exhibitions inspire from this century-old building, and through a large number of documents, cultural relics, pictures and art works, combined with the restoration of historical scenes, immersive reading, and multimedia audio-visual technology, it displays the spread and development of Marxism in China in comprehensive and systematic manner.

The Sino-French University is one of the early activity venues of the Communist Party of China. Its predecessor was the French Preparatory School founded by the Association for Work-Study Program in France, initiated by Cai Yuanpei and others in the early days of the Republic of China. It had cultivated a group of students with patriotic feelings and progressive ideas.

As the century-old historical tide is surging, the important history carried by the former Sino-French University has regained its splendor. The revolutionary torch has been passed on from generation to generation, and the light of the truth of Marxism will continue to shine on our way forward.

The former site of the editorial office of the New Youth

Opening the gate of No. 20 Jiangan Hutong on Beichizi Street, a small courtyard appears in front of you. This is the place where the editorial office of “New Youth” moved from Shanghai to Beijing in 1917, and it is also the place where Chen Duxiu rented when he was in Beijing.

Opening the vermilion door and crossing the porch, the south room, the north room and a small inverted room against the street door encircle a small courtyard of green bricks and gray tiles. On the west wall, bronze relief sculptures depict scenes of Chen Duxiu, Li Dazhao and others who worked here, and several small red fish swim happily in the fish tank in the courtyard.

After the editorial office of New Youth was moved to Beijing, it quickly became the main front of the New Culture Movement and the most important publication for the spread of Marxism. A group of Chinese intellectuals with progressive thoughts gathered in this small courtyard to explore the way to save the country and the people, and to light the spark of ideological revolution.

With the popularity of literary and artistic works celebrating the centenary of the founding of the CPC, such as Awakening Age, this place, as one of the important scenes in the TV play, has triggered a visiting wave and become a red landmark that goes viral online, and an endless stream of tourists make appointments to visit it.

Tips from Beijing Municipal Bureau of Culture and Tourism: As the National Day holiday is approaching, we encourage citizens to celebrate the festival locally and reduce activities outside Beijing. If you do need to go out of Beijing, you should guard against the risk of epidemic during the journey, wear a mask throughout the travel, do your personal protection, and do not go to counties (cities, districts, banners) where there is an epidemic. The people entering and returning to Beijing will not gather, party or go to crowded places within 7 days after arrival, and should undergo nucleic acid testing as required. Citizens who want to enter various parks, scenic spots, attractions, libraries, art galleries, etc., please make an appointment in advance and visit at off-peak times.