Putting up or changing door gods, is an important custom among the Chinese during Spring Festival. Door gods are pictures of deities posted on the door outside and inside the house. They are expected to keep ghosts away, protect the family and bring peace and good fortune. They are named according to function. There is the main door god, the secondary door god, the back door god and the wing room door god.

A typical Chinese house has a huge front gate/door with two wings that open in the middle. The door gods always come in pairs facing each other. It is considered bad luck to place the figures back-to-back. 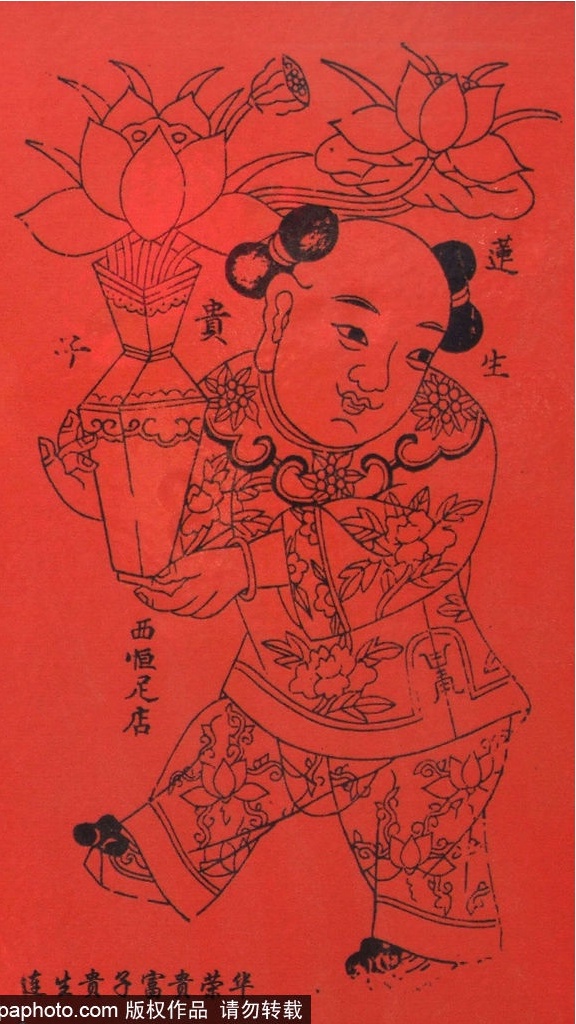 The image of a chubby baby is considered as a wing room door god, symbolizing good luck, longevity and fertility.

The main door god comes in several different forms. The earliest door gods were Shen Shu and Yu Lei. They were assigned to guard the entrance to heaven under a magical peach tree that grew on Mount Tu Shuo, where they either let people pass into heaven, or rejected them, based on their life's deeds. The Jade Emperor decreed that those who had done evil should be caught, bound and thrown to the tigers. Zhong Kui the ghost-catcher was a door god in the Tang Dynasty. Strictly speaking Zhong was not a real door god but a mythical ghost-catcher and he is often called the "backdoor general".

Nowadays, the most common door gods are Ch'in Shu-pao and Yuchi Gong, who became popular during the Yuan Dynasty. Ch' in has pale skin and usually carries swords; Yuchi has dark skin and usually carries batons. According to a Tang Dynasty legend, the emperor ordered the two generals to guard his door while he slept to keep away a ghost that had been bothering him. With the two men standing guard at the door, the emperor slept peacefully. The next day, the emperor, not wanting to trouble his two loyal generals, called on men to hang portraits of the two men on either side of his door. Ordinary families soon adopted the imperial custom, putting woodblock prints of the ever-vigilant generals on their front gates in the hope of attracting good luck and fending off evil spirits.

The Door God business soon spread throughout China, adding other folklore heroes and mythological figures to the repertoire.