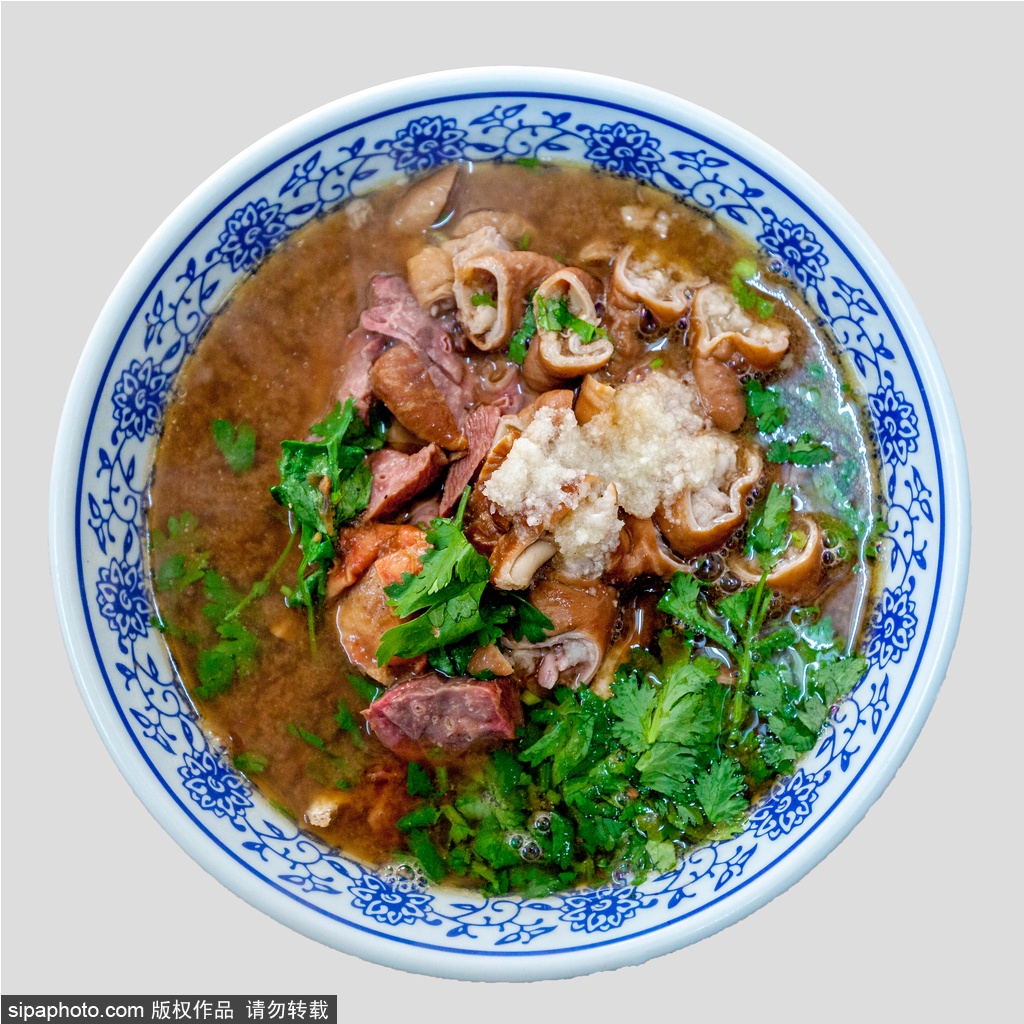 Luzhu huoshao(Chinese: 卤煮火烧; pinyin: lúzhǔ huǒshāo; lit.: 'pork stew with bread') is one of the most well-known traditional Beijing street foods. Long considered a luxury, the cuisine is especially prevalent in Beijing. The main ingredients are pork, pork lung, pork intestines, pork liver, tofu, and some may add Fermented bean curd or chives sauce, and it is served with bing bread.

The origins of luzhu huoshao can be traced back to the Qing dynasty as a palace food in Peking. According to legends, "su zao rou" (Chinese: 蘇造肉) was a dish invented by Zhang Dongguan as a tribute for Qianlong Emperor during one of Qianlong' inspection to Suzhou around 1970 and it was the origin of luzhu huoshao .[3] Unlike other cook Zhang Dongguan usually combines different types of herbs and spices in cooking, and his technique impressed Qianlong emperor, so Zhang eventually became the lead cook in the palace. As time goes by, the recipe of "su zao rou" spread to the out side of palace as well, and many people tried to imitate the cooking style and eat like an emperor. However the key ingredient, which is pork belly, was not very affordable for many people at that time. Therefore, pork lung, intestines and many other type of pork offal were used as a substitute for pork belly, in order to make the most people able to afford this dish. Hence, luzhu huoshao was formed over generations, and since then, it has become one of the most well-known Beijing street food, and still in fashion nowadays.

Much like Stinky tofu, luzhu huoshao also has a very strong odor, and it could be a challenge for people who haven't ever tried before. However, it is still one of the most famous Beijing traditional street foods, and a "must try" for local Beijing people. Cui Daiyuan (崔岱远) is a contemporary writer from Beijing, and in his book "The flavor of Beijing" (京味儿), Cui has described luzhu huoshao as "a food that allows the poor people to experience the superior life" (穷人解馋的玩意) in the chapter for luzhu huoshao. In his opinion, Beijing's street foods such as luzhu huoshao provides a chance for the poor people to experience how the foods in palace taste like. Luzhu huoshao was originated from palace food, hence the ingredients were costly for many families in the olden days. Nevertheless, many people also wanted to know how does the food for the emperor tastes like, so they replaced the expensive ingredients such as pork belly with cheap ingredients such as pork lung and intestines, and created their own version of "palace food". Nowadays, eating luzhu huoshao is more like a custom that Beijing people feels attached with. Not everyone would accept the strong odor, but people who likes it certainly feels attached to it and the traditional Beijing culture.[5] Therefore, you can still find many restaurants that sells luzhu huoshao in Beijing, or even overseas.

There are certain characteristics that are expected from a well made luzhu huoshao, which also make it a unique Beijing street food. Similar to baodu, the meat in a well made luzhu huoshao is supposed to be reasonably chewy, neither too tough nor falling apart.[7] It might have an unappetizing appearance, but the taste should be rather complex and salty, with a sense of herb and soy sauce. The huo shao (Bing (bread)) is soaked in the soup to flavor it, and it should be juicy rather than sticky. Pork offal would have a strong odor due to its property, but it should still be fresh made, without any tacky taste or smell.

In the time-honored store, offal, tofu and Huoshao (baked wheaten paste) is being boiled in two large pots all day long, giving off an inviting smell. The generous restaurant owner gives each bowl an abundant portion.

The small pieces of extremely soft offal and Huoshao with X-shaped cut in the savory garlic soup merit the reward of “the most popular Beijing snack”.

Crispy pyramidal Zhaguanchang (garlic-topped deep-fried crackers) in the tangy garlic sauce is also a must try, so do Zhajiangmian (noodles with soybean paste) and mutton shashlik.

Moreover, there are pepper and other species for you in case that you want to DIY your dipping sauce to your taste. Mind you, this delicacy goes especially well with side dishes!

"Small bowl of luzhu is white and red, with rotten pork intestines and strong marinade. Old taste went through generations, and remembered by generations of Beijingers." This poem shows how important Xiao Chang Chen is in the heart of native Beijingers.

Founded in 1886 by a father and a son, namely Chen Zhaoen and Chen Shirong who had sold pork in broth along the street and later sold stewed intestine. The third generation of successor Chen Yutian made the stewed intestine more authentic. He treated others kindly and was equally honest with aged and child customers. Therefore, he was recognized by customers, who called the stewed intestine stall as "Xiao Chang Chen".