The Temple comprises the Circular Mound Altar and Altar of Prayer for Good Harvest, divided by two enclosed walls into inner part and outer part with both square in the south and round in the north. Worship building concentrated in the inner altar, the inner altar on all sides of doors. The axis connecting the two altars is a brick masonry platform that is 360 meters long, 28 meters wide and 2.5 meters high, it is also known as "the Sacred Way" or "Sea Coat Avenue". It is also called The "Vermilion Steps Bridge" which symbolizes the long way to heaven.

The building complex of the Circular Mound Altar located at the southern end of the central axis, is the altar for the emperors of Ming and Qing dynasties to worship the emperor God. The north of the Circular Mound Altar is the Imperial Vault of Heaven. Altar of Prayer for Good is located at the northern end of the central axis. The temple complex was constructed from 1406 to 1420 during the reign of the Yongle Emperor of Ming Dynasty, who was also responsible for the construction of the Forbidden City in Beijing. It is currently located in Dongcheng Beijing, China. The complex was extended and renamed Temple of Heaven during the reign of the Jiajing Emperor in the 16th century. Jia ging also built three other prominent temples in Beijing, the Temple of the Sun(日壇) in the east, theTemple of Earth (地壇) in the north, and the Temple of Moon (月壇) in the west. The Temple of Heaven was renovated in the 18th century under the

Qianlong Emperor. By then, the state budget was insufficient, so this was the last large-scale renovation of the temple complex in imperial times.

In 1914,Yuan Shikai, then President of the Republic of China, performed a Ming prayer ceremony at the temple, as part of an effort to have himself declared Emperor of China. In 1918 the temple was turned into a park and for the first time open to the public.

The Temple of Heaven was inscribed as a UNESCO World Heritage Site in 1998 and was described as "a masterpiece of architecture and landscape design which simply and graphically illustrates a cosmogony of great importance for the evolution of one of the world’s great civilizations..." as the "symbolic layout and design of the Temple of Heaven had a profound influence on architecture and planning in the Far East over many centuries." 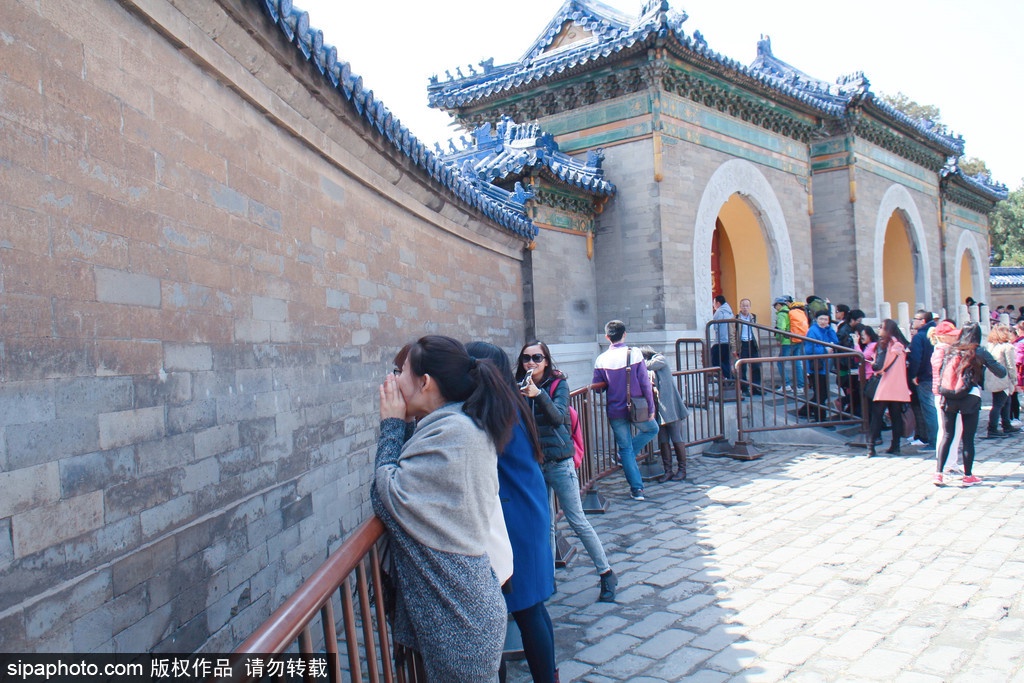 Located in the southern part of this area, The Circular Altar Mound is actually the Temple of Heaven in the practical sense. During the Ming and Qing Dynasties, the emperors would offer sacrifice here to Heaven on the day of the Winter Solstice every year. Its famous buildings include the Lingxing Gates, the Lantern Viewing Pole, the Terrace of Worshipping Heaven, the Heaven Heart Stone, the Firewood Stove and the Divine Kitchen Courtyard.

Along the middle axis, from the Circular Mound Altar to the north, you will see the Imperial Vault of Heaven. It is the place housing the Gods' tablets to be used at the Heaven Worship Ceremony. It is famous for the Echo Wall, Three Echo Stones and the Dialogue Stone, which are all interesting attractions utilizing the theory of sound wave. Also called the Vermilion Steps Bridge, the Danbi Bridge connects the northern part and the southern part. The south end of the Bridge is lower than its north end. The emperors believed that they could go to heaven by this Bridge, hence the name, Sacred Way. The Sacred way had three routes, the central one was the Imperial Route exclusively used by the Emperor and on one side was the Princes’ Route. On the other side was the route for high officials.

Altar of Prayer for Good Harvests Across the Danbi Bridge, you will come to the Hall of Prayer for Good Harvests. It is a big palace with round roof and three layers of eaves, where the emperor held the worship ceremonies to pray for good weather and abundant harvests. It is the earliest building of the Temple of Heaven. It is a complex consisting of the Hall of Prayer for Good Harvests and the Altar for Grain Prayers. Located in the southwest of the Altar of Prayer for Good Harvests, the Palace of Abstinence is where the emperor fasted before the Heaven Worship Ceremony began. It has several distinctive buildings, such as the Beamless Hall, the Rest Palace, the Belfry, etc. 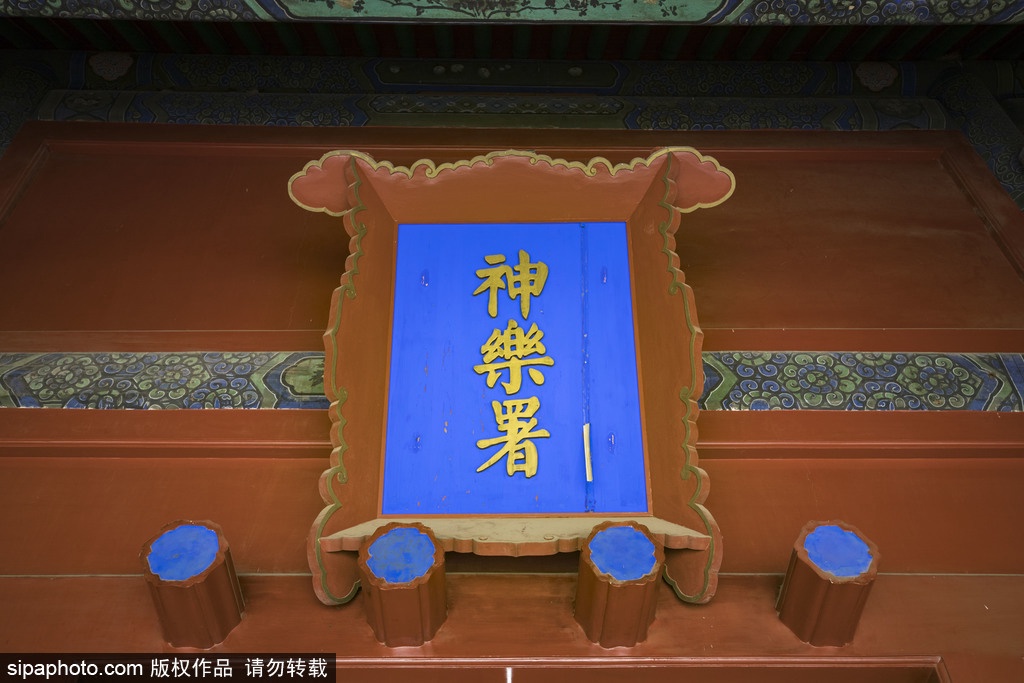 Located to the southwest of the Palace of Abstinence, the Divine Music Administration is one of the five major buildings in this scenic area. This was the location of the managing body for the ceremonial musical instruments as well as the place where the sacrificial ritual was devised and rehears ed. This was the most important ritual music academy of the Ming and Qing dynasties.

Established by Emperor Yongle of the Ming Dynasty, the annual Worship of Heaven ceremony by the emperor took place here. The ceremony was subject to special regulations for its preparation, place, time, procedures, music and dance. This ceremonial practice confirmed the divine right of emperor and the religious belief of the ancient Chinese people. 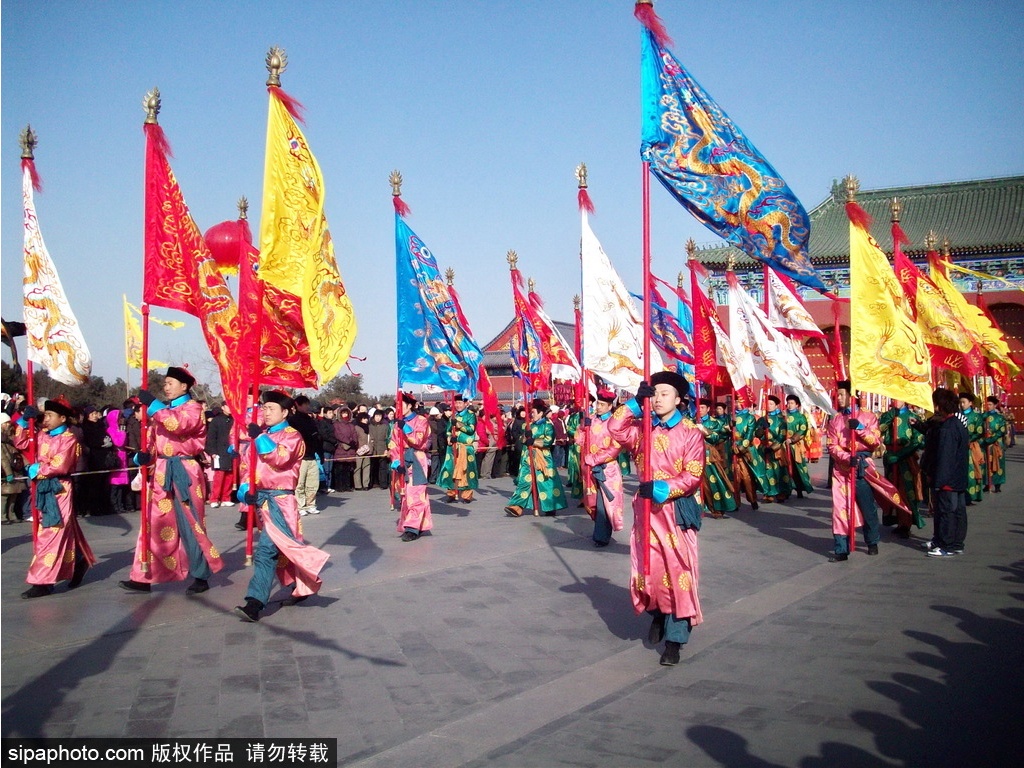 In ancient China, the Emperor of China was regarded as the Son of Heaven, who administered earthly matters on behalf of, and representing, heavenly authority. To be seen to be showing respect to the source of his authority, in the form of sacrifices to heaven, was extremely important. The temple was built for these ceremonies, mostly comprising prayers for good harvests.

Twice a year the Emperor and all his retinue would move from the Forbidden City through Beijing to encamp within the complex, wearing special robes and abstaining from eating meat. No ordinary Chinese was allowed to view this procession or the following ceremony. In the temple complex the Emperor would personally pray to Heaven for good harvests. The highpoint of the ceremony at the winter solstice was performed by the Emperor on the Earthly Mount. The ceremony had to be perfectly completed; it was widely held that the smallest of mistakes would constitute a bad omen for the whole nation in the coming year.

Earth was represented by a square and Heaven by a circle; several features of the temple complex symbolize the connection of Heaven and Earth, of circle and square. The whole temple complex is surrounded by two cordons of walls; the outer wall has a taller, semi-circular northern end, representing Heaven, and a shorter, rectangular southern end,representing the Earth. Both the Hall of Prayer for Good Harvests and the Circular Mound Altar are round, each standing on a square yard, again representing Heaven and Earth. The number nine represents the Emperor and is evident in the design of the Circular Mound Altar: a single round marmor plate is surrounded by a ring of nine plates, then a ring of 18 plates, and so on for a total of nine surrounding rings, the outermost having 9×9 plates.

The Seven-Star Stone Group, east of the Hall of Prayer for Good Harvest, represents the seven peaks of Taishan Mountain, a place of Heaven worship in classical China. There are four main supportive, dragon pillars each representing a season. The structure, held up by these dragons, imitates the style of an ancient Chinese royal palace. Twelve inner pillars symbolize the lunar months, and it is thought that the twelve outer pillars refer to the 12 two-hour periods of the day.

The Temple of Heaven is located in southern Dongcheng District, which until 2010 was part of Chongwen District. The park itself is open daily from 6:00am–10:00 pm. The relic sites inside the park open at 8:00 and close at 17:30 from April 1 to October 31, and close at 17:00 from November 1 to March 31. There is a nominal entry charge which varies according to whether it is peak season or off season. Tickets stop selling one hour and half before gate closing.

All four of the park's gates are accessible by public transportation.