Zhengyangmen, known as Qianmen Gate, Gate Tower of Qianmen, or Daqianmen, was formerly named the Lizheng Gate. It served as the south gate of the Inner City of Beijing in the Ming and Qing Dynasties. Zhengyangmen is located in the southernmost end of the Tiananmen Square in the south-north axis of Beijing and the south of the Memorial Hall of Chairman Mao. Originally built in the 17th year of Emperor Yongle's reign (1419 AD) of the Ming Dynasty, it is one of the "Nine Gates of the Inner City". Consisting of the Gate Tower, the Archery Tower, and the Barbican, it was a complete defensive building system in ancient times. Zhengyangmen, formerly named Lizheng Gate, was connected as a whole by walls of the Barbican but later separated into two parts due to road repairing. In general, however, Dashilan is also called Qianmen which covers Zhengyangmen as well as Zhubaoshi and Dashilan in its front, and the Gate Tower and the Archery Tower are collectively called Zhengyangmen. It is situated in the south-north axis of Beijing. The Archery Tower, the Gate Tower, the Barbican, Zhengyang Bridge, and the Wupailou Archway constitute an architectural complex with a reasonable layout, a grand structure, and a dignified style.

The "three bridges" refer to the Zhengyang Bridge over the city moat in front of the Archery Tower. The bridge is a stone arch bridge, but the broad bridge floor is divided into three passages by handrails. The middle passage facing the gateway to the Archery Tower was known as the royal passage which could only be used by emperors. The Gate Tower of Zhengyangmen sits on a brick platform with an obvious volumetric shrinkage from the bottom to the top. The platform has a width of 95 meters, a thickness of 31.45 meters, and a height of 14.7 meters. It has a 1.2-meter-high parapet on the north and south and covers an area of 3,047 square meters. The floor of the platform is paved with city wall bricks. The Gate Tower is a pavilion-style building trimmed with gray pantiles and green glazed tiles in the three-eave and Xieshan (gable and hip roof) style. The ridge is decorated with dragon head decorations, and each side has columns in three stories, i.e. eave columns, old eave columns, and hypostyle columns. The beams and columns are vermilion and painted with colored flower patterns. There are doors in the four sides both in the upstairs and downstairs. The Gate Tower has a length of seven jian (one jian is the distance between two girders) and a width of three jian.

There is a winding corridor between the two floors. The upper floor is installed with doors and windows with rhombic patterns in the front and back, and the lower floor has vermilion brick walls. And there are solid doors in front of the central bay and two sides. Sloping riding tracks are along the inner side of the city wall at the two ends of the Gate Tower to ascend and descend. The Gate Tower has a width of 41 meters and a length of 21 meters; the building body has a width of 36.7 meters, a depth of 16.5 meters and a height of 27.3 meters; the whole Gate Tower is 43.65 meters high, which makes it the highest among all gate towers in Beijing. A large wooden plaque is hung over the eaves in the outer side of the Gate Tower. The arched gateway is set in the center of the platform, with five layers and five vaults. The inner vault is 9.49 meters high and 7.08 meters wide, and the outer vault is 6.29 meters high and 6 meters wide.

The Archery Tower of Zhengyangmen is a brick fortress building which can best reflect the military defense concept and the workmanship of the ancient times. It stands on a brick platform. The platform is about 12 meters high, with an obvious volumetric shrinkage from the bottom to the top. An arched gate, with five layers and five vaults, is set in the center of the platform, opposite to the city gate. Inside the gateway is an "orgue". The platform is 10 meters wide in the south and 12.4 meters wide in the north. It covers an area of 2,147 square meters. The Archery Tower has four floors. The top was trimmed with gray pantiles and green glazed tiles in the double-eave and Xieshan style and decorated with green glazed animals. A total of 86 arrow holes were dug in the south, east and west for the purpose of defense (to shoot an arrow). In the south, there are four floors, each with 13 holes; in the east and west, there are also four floors, each with four holes; in the small house attached, there are two holes. The Archery Tower, with a structure of the front tower and rear attached house, has a length of seven jian with a width of 62 meters and a breadth of 20 meters; the five-jian attached house and wing-rooms are in the north, with a width of 42 meters and breadth of 12 meters; and the whole building is 35.37 meters high. Among the archery towers of Beijing in the Ming and Qing Dynasties, only the Archery Tower of Zhengyangmen has a gate and is the loftiest and most majestic one. With a unique structure, it has been regarded as a symbol of old Beijing.

Between the Archery Tower and the Gate Tower is an oblong Barbican. It is 108 meters long from south to north and 88.65 meters wide from east to west. The two inner angles in the northeast and northwest are right-angled, and the two outer angles in the southeast and southwest are rounded. The Barbican connects the city wall, the Gate Tower, the Archery Tower and two side towers. The wall of the Barbican is as high as the city wall (about 11.36 meters) but narrower. It has an earth core and is laid with large city wall bricks on the surface. The paved path at the top of the wall was built with city wall bricks. A battlement was built on the outer side of the wall, and a parapet was built on the inner side. There were spaces inside. An arched gateway is dug on the four sides of Barbican, with a lifting gate equipped in the east, west and south. The north gate is under the magnificent Gate Tower, the south gate under the lofty Archery Tower, and the east and west gates under the side towers. The riding track was designed for the guarders of the city so that they could ascend and descend. It was attached against the inner side of the city wall with a gradient from fifteen to thirty and width from four to five meters. On the outer side of the sloping track, a low wall was built.

Qianmen Street is Beijing’s well-known commercial street. It is located on the central axis of urban Beijing, spanning from the northern Qianmen Yueliangwan to the southern road junction of Tianqiao, connecting with Tianqiao South Street. Before the establishment of Outer City in the 29th year of Emperor Jiajing's reign of the Ming Dynasty (1550 AD), it was the imperial road for emperors to the Temple of Heaven and Altar of Mountains and Rivers; later it became the main north-south street of Outer City. It is called Qianmen Street by the common people. The street is 845 meters long, with a 20-meter-wide roadway. It was called Zhengyangmen Street in the Ming and Qing Dynasties, and the Republic of China. In 1965, the official name “Qianmen Street” was set. 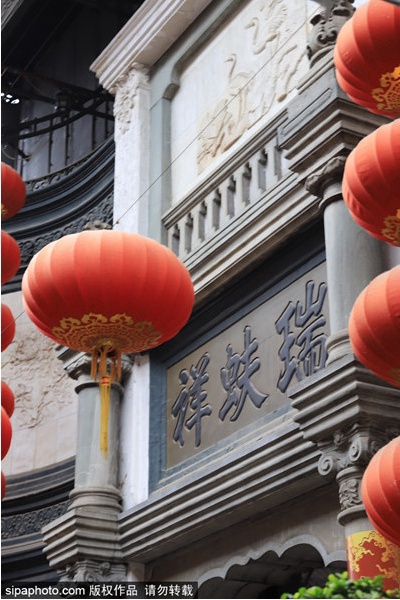 With a long history, Qianmen Street is home to China’s 16 time-honored brands, such as Liu Bi Ju (sauce and pickle shop), Tong Ren Tang (pharmacy), Refosian (silk store), Chang Chun Tang (pharmacy), Nei Lian Sheng (shoe store), Zhang Yiyuan Tea House, Yue Sheng Zhai and Du Yi Chu (shaomai store). In hutongs such as Xianyukou and Damochang, shops and restaurants also stand in great numbers. However, there are no famous time-honored brands; instead, foreigners run shabby beauty salons and small restaurants here. When the reporter arrived at noon, there were one or two guys standing in front of each restaurant to attract pedestrians with their sounds rising one after another.