When night falls, Beijing is illuminated. The neon lights light up the luxury of the city and cover up the starry moonlight, casting ever-changing colours into the sky. When the hustle and bustle of the day fades away, Beijing looks like a young man in the late evening, stylish and energetic. Such night view is absolutely worth a sightseeing for both tourists and local resident.

Whenever you come to Beijing, Chang’an Street is definitely a must-visit place. Most people come in day time, but in fact, the night view of here is absolutely gorgeous! Free from the hustle and bustle of the day, Chang’an Street at night is even more charming. The Tian’anmen Rostrum is more solemn under the lights. In addition to tourists, many residents who live around also come to enjoy the scenery at night! 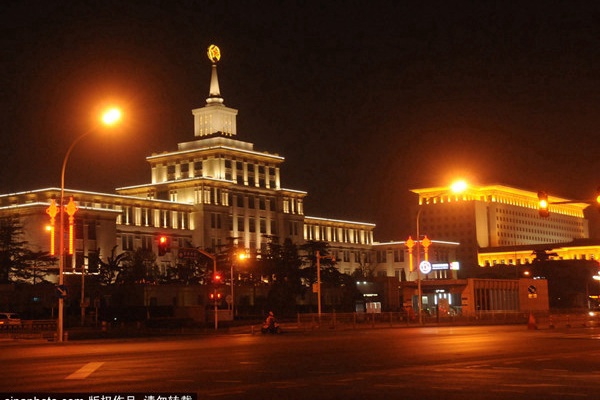 The Monument to the People’s Heroes stands in the centre of Tian’anmen Square, with the Great Hall of the People on the west, and the National Museum on the east. These buildings are particularly beautiful at night. Chang’an Street is a magical road, whenever you pass by, you will unconsciously feel proud and respectful. During large-scale events or festivals, the night lighting in Beijing is turned on at the “major festival” level, and Chang’an Street will present a beautiful scene with bright lights and dazzling night. The 3D themed flower lights built along Chang’an Street are bright and gorgeous at night, creating a strong sense of grandeur, unity, harmony and forging ahead. CCTV Tower is located on Beijing’s West Third Ring Road. With the beautiful Yuyuan Lake and the famous Diaoyutai on its east, the West Railway Station to the south, and the tourist resort Summer Palace to the north, it covers an area of 15.4 hectares with the tower height of 405 meters. CCTV Tower is a high-tech comprehensive building that integrates radio and television transmission, tourism, dining, and entertainment. The wide trestle square, the white marble setback ring corridor, the palace lamp-shaped tower, the tower base designed according to the Hall of Prayer for Good Harvests... It perfectly reproduces the ancient Chinese architectural style and demonstrates the exquisiteness of modern architecture.

The 238-meter open-air viewing platform is equipped with high-powered telescopes. On this high building, you can enjoy the beautiful night view of Beijing. Strolling on the viewing platform, surrounded by clouds and mist, you will feel like floating as a fairy in the Yaochi. The aerial view revolving restaurant in the CCTV Tower is the most unique buffet restaurant in Beijing, and was rated as “Beijing’s Top 10 Romantic Places”. Located 221 meters above the ground, it is a veritable “Beijing’s highest restaurant”. It mainly serves Chinese and Western buffets and various types of teppanyaki. There are nearly 200 kinds of food for you to taste! Chefs will prepare food for you on the spot. The restaurant can accommodate 200 people to dine at the same time, and rotates 90 minutes per round. You can enjoy delicious food and the beautiful scenery, watching the moon and stars and overlooking the neon city of Beijing. Isn’t it a paradise! The CCTV Tower is now a state-level 4A attraction. Its night scenery is solemn, elegant and magnificent adding a colourful scene to Beijing City, making people unwilling to leave. There will also be a light show during major festivals! Transport: Walk north from Gongzhufen B1 Exit of Metro Line 1.

The Water Cube, or the National Aquatics Centre, is one of the landmark buildings of the 2008 Beijing Olympics, with a total construction area of approximately 100,000 ㎡. During the 2008 Olympic Games, the Water Cube undertook swimming, diving, synchronized swimming and other competitions, generating 42 Olympic gold medals in total. After the Olympic Games, the Aquatics Centre not only undertakes major water games, such as the Paralympic Games, World Swimming and Diving Championships and various regular events, but also serves as a multi-functional international fashion centre integrating swimming, sports, fitness and leisure, providing infrastructure for citizens to do sports and exercises.

The night view of the Water Cube is absolutely beautiful, attracting countless people to come and take photos! 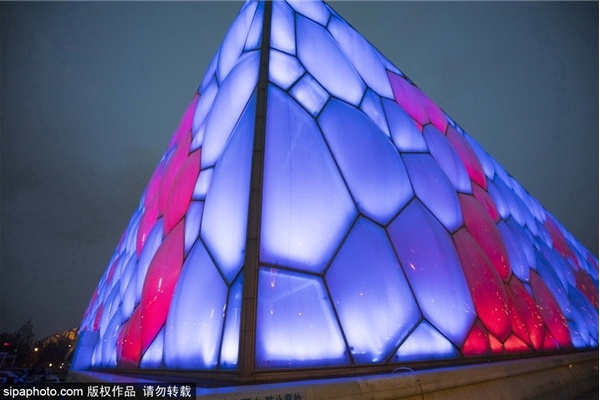 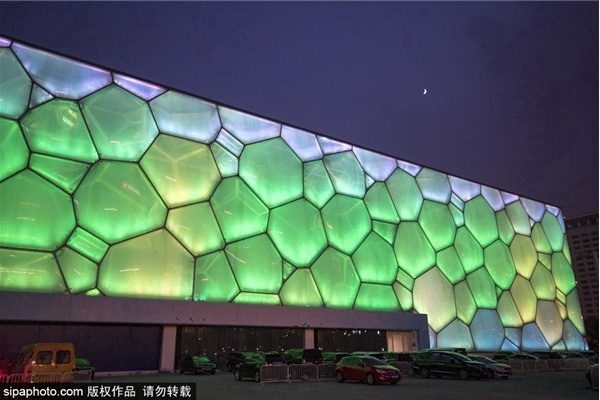 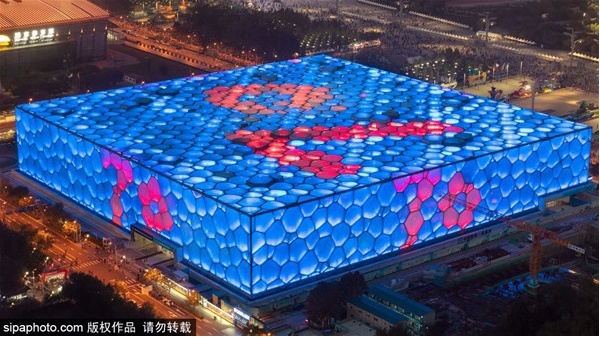 During major festivals, the Water Cube will also have stunning light show performances!

The National Stadium is commonly called the Bird’s Nest. The Bird’s Nest is the main stadium of the 29th Summer Olympics. It covers an area of 20.4 hectares, with a construction area of 258,000 ㎡ and can accommodate 91,000 spectators at the same time. This project is at the level of super sports building. The main structure can be used for 100 years. The main building is an elliptical Bird’s Nest made of a series of steel trusses around the bowl-shaped seating area. It is 333 meters long from north to south and 296 meters wide from east to west. The Bird’s Nest is located on a pedestal platform that rises gently from the ground. On the north side of the pedestal is a sinking warm-up venue, which is connected to the playing venue in the home court through an athlete channel. There are seven floors above the stadium base, with spectator service facilities, media work area, VIP reception area, business area, etc. There are three floors below the pedestal, with a zero-level internal loop, a parking lot, and a large number of functional rooms. The bowl-shaped stand is divided into upper, middle and lower floors, and a box and its seating area are provided between the upper and middle stands. 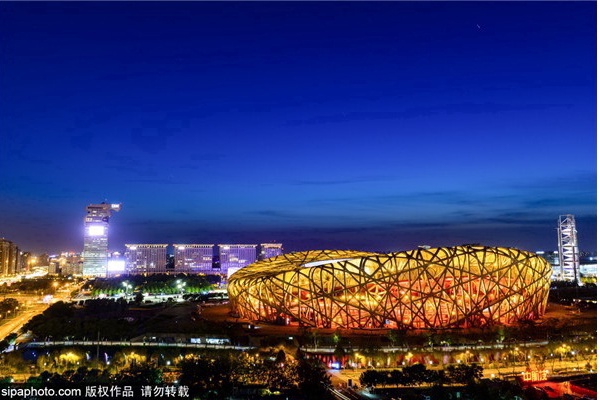 During major festivals, there will be light shows on the Olympic Tower. As the Water Cube, the Bird’s Nest and the Olympic Tower are very close to each other, you can visit the three of them at once!

Zhongguancun is a representative of technological innovation. It is a place where you only find tall buildings and people come and go during the day, but what about late at night? 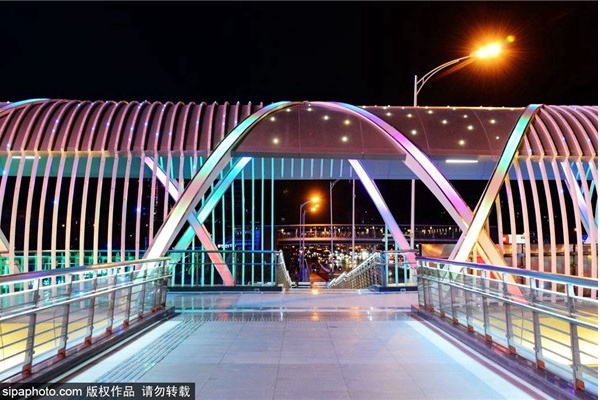 The blue lines on the outside intersect with the rose red lines inside, similar to the radiant azure blue sea. The lights follow the “double helix” and slowly change their colour, making you feel like travelling through time and space... Under this colourful night scene with the prosperity and charm of modern cities, passers-by stop to take photos while perceiving the innovative development of Zhongguancun. During major festivals or events, Zhongguancun will host themed light show. For example, during the “Long Live the Motherland” themed light show, 70 buildings along 7.2 km Zhongguancun Street, 13 pedestrian bridges and Zhongguancun Square were lighted up one after another. A dazzling “light stream” throughout the north and south Beijing, making up a spectacular gift for China! Transport: Get off at Zhongguancun Subway Station from Metro Line 4

Shimao Tianjie is located on the east side of Dongdaqiao Road. It is composed of commercial corridors on both north and south sides and two office buildings. It also has outdoor areas such as Stepped Squares. The commercial gallery is an all-stone building with a modern style and a sense of quaint and mellow. It has Asia’s first and the 3rd biggest LED screen. The LED screen is 250 meters long, 30 meters wide, and costs a total of 250 million yuan. It is designed by Jeremy Railton, a Hollywood stage master who has won Oscar and four Emmys. Movies, football games, Spring Festival Galas can be broadcasted here, and the screen is also a perfect platform for online interaction and proposing marriage. Designed by world famous architect Zaha Hadid, Wangjing SOHO is located at the intersection of Wangjing Street and Fu’an West Road in Chaoyang District. It covers an area of 115,392 ㎡, with a planned total construction area of 521,265 ㎡, and a total office area of 364,169 ㎡. The project is composed of a high-rise building integrating office and business  and three low-rise single-storey commercial buildings. The highest one is as tall as 200 m. When the building was constructed, its unique shape is eye-catching, its lighting design, in particular, is quite unique in China. Every night, the whole building is brightly lit and full of sense of technology! When visiting Beijing, do come and see!